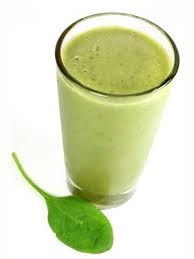 I could never hop on the smoothie fad. Why would anyone want to blend fruit? As a fruit addict, I’d rather just pop it into my boca straight up.

Then last spring I visited my friend Carol and she made what I’ve dubbed the kick-cancer smoothie. It includes milk, plain yogurt, fresh fruit, and FRESH SPINACH plus a spoonful of Living Fuel Supergreens, a powdered dose of a bunch of green stuff that’s good for you. I buy mine from the Web. It’s expensive, but I don’t have to take a multivitamin when I consume this product.


I became an immediate convert because I’m always looking for a way to get more green stuff into myself. I hate making salads but I know fresh is best. Carol’s smoothie gave me a way to put fresh spinach into my body – and I couldn’t even taste it. I bet kale would work as well.


I’ve had four basal cell carcinomas and one squamous cell carcinoma cut out of my face and neck so I’m very motivated to UP my immune system with antioxidants like those you find in spinach, kale, and other green stuff. (A nurse friend cautioned me to be careful not to consume too much spinach because it can thin the blood.)


Now, in the two months I’ve been making smoothies, I’ve increased the green powder to a point that my smoothies look green no matter how much fruit I include. I served one of my smoothies to a six-year-old neighbor recently and he drank at a fourth of it before stopping, with the comment, “I don’t really like this. It’s just really kinda gross.”


I guess I should have lightened up on the green stuff for the poor kid.

PS I got the photo for this blog from the Internet; my smoothies aren't quite that green.


½ to 1 c. plain unflavored yogurt (as fatty or nonfatty as you wish)


a handful of fresh spinach (I don’t cut off the stems; I just wash it and squeeze out the water)


1 heaping tsp. or as much Living Fuel Supergreens as you want (also available in berry flavor)

As much fruit as you want:


handful of fresh or frozen strawberries


Blend, baby, blend. May serve one or two people, depending on how much you want!