I had a real champeen of a frustration dream last night.

I was in a huge warehouse-like place, trying to get a car wash. There was a long wait. . . and wait . . . and wait. I had a brand-new tiny black kitten in the car with me. I loved that kitten.

I eventually gave up on ever getting the chance to pay, and I returned to my where I had left my car. My key worked but it was the wrong car. I talked to an attendant nearby, and he told me that he had moved my car.

I searched and quickly found the little black purring ball of fur. I was happy and I finally drove off.

What are frustrations dreams about? One I get from time to time is that I have to take a final exam in college but don't know what building the exam is being held in. They say a lot of people get those dreams, especially if they were conscientious students.

I don't know why I get them; all I know is that I hate them! . . . although I do laugh at them afterward.

I wonder about other people . . . does everyone have frustration dreams?

Gail Grenier is the author of Dog Woman, Don't Worry Baby, Dessert First, and Calling All Horses, all available at Amazon.com.

Posted by Gail Grenier at 9:32 AM No comments: 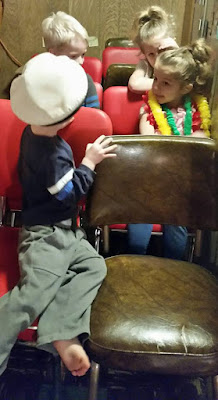 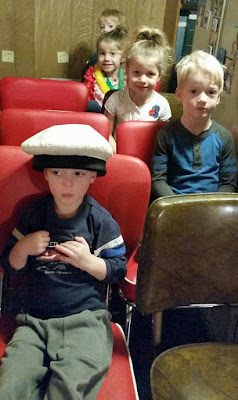 Children give us answers, if we watch them.

Yesterday I took care of three of my grandsons and four of my "borrowed" grandchildren. The borrowed ones aren't blood, but they are dear to me and I've visited them nearly every week as they've grown up.

My husband has been doing a carpentry project in the basement, so to make room, we pushed a bunch of kitchen chairs to one side. Those chairs all in a row reminded me of playing "train" when I was little.

So yesterday, I asked the kids if they'd like to play train. They were on that idea immediately. What followed was about an hour of switching seats, getting "on" and "off" the train, handing pretend tickets to whoever was the conductor at the time, and choosing destinations.

They also dressed up - in the pictures above, you can see Simon (the conductor) wearing my husband's old cap from the U.S. Coast Guard. And you'll notice that Ariella is adorned with as many leis as she could find in the dress-up bin.

The children's destinations included "Denver, to visit Natalie," "the ball," "the party," and (my favorite) "to see the fish in TheWaukee." (We live in Milwaukee.)

I was thinking how much fun kids can have when left to their own imaginations, when I heard a radio show about a woman who is driving a campaign to inspire parents to hold off giving smart phones to their children. I thought, great! Then I heard the title of the campaign: "Wait 'till they're eight."

There aren't enough exclamation points for me to express how I feel about this.

Childhood is a fairly modern construct. Kids worked like pack mules through much of history. Who can forget the pictures of the soot-stained, hollow-eyed youngsters who worked during the Industrial Revolution?

Part of preserving childhood is allowing young ones the freedom to not worry about certain things. A smart phone adds layers of awareness and worry about things a child doesn't have to bother with. I could go into detail but anyone connected to phones and the Internet knows what I'm talking about.

My vote: keep childhood a time of kitchen chair basement trains and trips to TheWaukee.

Gail Grenier is the author of Don't Worry Baby, Dog Woman, Calling All Horses, and Dessert First, all available at Amazon.com.
Posted by Gail Grenier at 9:21 AM 2 comments: