Why go to your 50th high school class reunion? 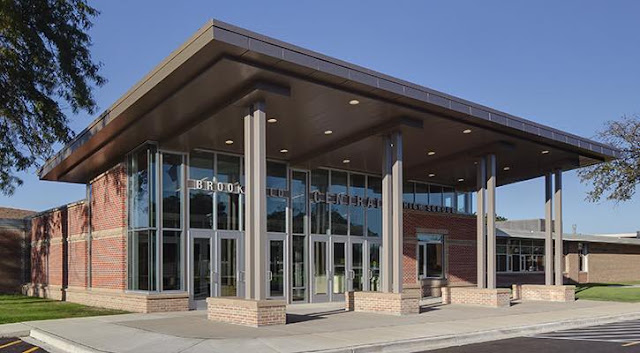 I just experienced my 50th high school class reunion, and that old joke isn't far from the truth.


One of my homeroom buddies, Nancy, didn't make it to the reunion because she's recuperating at home after experiencing a brain aneurysm about a month ago. A small group of us visited her on the morning of the reunion (photo above). At our request, Nancy recorded a video greeting for her fellow grads who'd gather that evening. She held the camera up to her face and said, "Hi. This is Nancy. I wish I were there with you; unfortunately I'm not. The good news is I'm still alive, so have a great time." Every time she smiled, her face brightened with a light I've never seen on anyone. I think the smile said "I'm alive!"


The path to our reunion started two years ago when a classmate, Ted, set up the Brookfield Central (Wisconsin) Class of '68 Facebook page. Called BCHS Lancers of '68 +/-, it's not only for those of us from the Class of '68, but for graduates of other Central classes who might like to hop on. That page has about 224 members. A special in memoriam page has grown to about 800 members, including graduates from the first class in 1955 and including alumni from recent years.


Ted, a retired newspaperman and still an intrepid reporter and digger of facts, found all but 20 of our living classmates. He enlisted classmates Ann and Elyce to help interview grads for birthday biographies. They became the "birthday brigade" and interviewed alums by email and phone. They asked questions you'd expect (about education, occupations, special people, special interests), plus one you might not anticipate: "What is your philosophy of life?" That last question is my favorite. I love to see what people have gleaned from life after 50 years. It's been a delight to find the adage true: with age comes wisdom, hard-won in many cases. And to my delight, some people I remember as the flightiest kids have grown into mature adults with a wonderful sense of their place in the world, a lovely sense of beauty and spirit.


From Ted's Facebook site grew a monthly local lunch gathering. Five or ten of us got together the last Saturday of most months just to talk. Eventually, lazily, ideas emerged for a reunion. When it became obvious that no one wanted to attend serious planning meetings, a leader arose: Jan. She said she'd do the work of organizing as long as she could be the sole decider. The group said both aye! and YAY! to that idea. Jan became our empress, or as she prefers to be known, our queen. She did most of the organizing, with just a bit of assistance from the rest of the local lunch group, plus Ted online from California.

Our reunion began Friday afternoon with a tour of our school, led by its current principal. Much has changed, including the addition of a gym and fitness center, a theater, and an industrial arts center that includes 3-D printers (!). However, to our dismay, our beautiful front lawn has been replaced by a parking lot. In our day, no one was allowed to bring a vehicle to school - we walked or traveled by school bus. Nowadays, kids drive to school. We ruefully reminisced about mellow lunch period gatherings on the front lawn during the first warm days of spring . . . and our misty camp-out on that same front lawn the night before graduation.

About 100 people attended the reunion events Friday and Saturday. Of a class of 363, at least 65 were members of the Class of '68, the rest spouses or friends or grads from other years.

At the reunion, people thanked Ted for creating the Facebook site. They said things like:
- "The class site seems to erase the cliques."
- "Our class seems united more than it ever has been."
- "I've found a whole bunch of new friends."

What I've noticed is the tremendous support extended through the site for members suffering from ill health or grief after the death of a loved one. You don't get to be a survivor without facing a lot of sadness along the way. And someone  the same age has the power and experience to extend a big basket of compassion.
Jan created a beautiful video commemorating the lives of our teachers who have died as well as our 52 classmates who are no longer with us. While yearbook pictures of the deceased scrolled by on the screen, including sometimes shockingly early dates of death, the song "For Good" from the play "Wicked" played in the background. I've never seen "Wicked," but the lyrics were beautiful, including "Because I knew you, I have been changed for good."

Brookfield Central was like many other high schools, I think, with plenty of cliques and mean kids. So why would anyone want to go to a reunion? Ted addressed this question on the Facebook site a month ago. Because he wrote it so perfectly, I'll take the liberty of quoting him directly here:


TWO NANCYS AND A JOANN:

A message to my classmates.

In a month, many of us will gather for our 50th year as graduates. The 363 of us handed our diplomas not really so long ago are, in a way, the only ones like us in the world: The Brookfield Central Class of ’68.

Three classmates who wanted to attend won’t be there. I’ll refer to them simply as Two Nancys and a JoAnn.

Nancy Grettenberg Buhr recently suffered a brain aneurysm, underwent surgery and as I write this is feeling much better, but still will be undergoing therapy for some time. Last year she tumbled down stairs and suffered multiple fractures and a concussion. She told us a few months ago that she had recovered enough to see us at the reunion. Sadly, she won’t make it.

Not long after Nancy Buhr’s fall, Nancy Busche DiFelice suffered a debilitating stroke, just 10 days after her birthday in 2017. She told us on her birthday last year that she hoped to attend the reunion. A couple weeks ago she let us know that not only the stroke, but also chemotherapy treatments, will keep her in North Carolina next month. It’s Nancy’s birthday today, and if you haven’t already, you might wish to send her greetings on today’s update.

JoAnn Papenfuss Kuster of Tempe, Arizona had attended several reunions and was planning to attend this one with childhood friends Nanette Curler and Karen Hoffman who she first met at Brookfield Elementary School. After locating Joann for this group, we exchanged e-mails and even some class photos from our friendship, dating back to when we entered kindergarten. JoAnn will not be attending our reunion. She passed away July 20 from cancer.

There are, of course, many others who won’t be there. Fifty-two classmates, including JoAnn, have passed away.

Other classmates, I’ve learned, won’t attend because of some, or all, of the following reasons:

Reason #1: Lingering bad memories from high school. Either they weren’t accepted, were shunned altogether, were bullied or subjected to name calling and ridicule. Or, they despised what they saw were an abundance of cliques based on artificial socio-economic, geographic or appearance criteria.

Reason #2: They tested those bad memories at an early reunion, and felt they witnessed some of the same cliques form, felt that once again that no one seemed to care if they were there. In so many words, they say they have no intention of being “insulted” again.

Reason #3: Due to today’s often divisive political climate, they fear that this reunion might degenerate into ugly debates.

We can’t turn back the clock on Reason #1, or by extension, Reason #2. I will, however, share that I’ve learned that some who treated people poorly back then deeply regret doing so. They’re even ashamed enough that they feel they might not be welcome at the reunion if they come. It was interesting to learn that such lingering feelings went both ways. I hope that people can wipe the slate clean next month. At the very least, I hope that everyone at least tries to reach out for a moment to EVERYONE else who comes. We were kids then. Now we’re approaching 70. There will be no better time to set things right.

Reason #3: Politics. I, for one, have absolutely no intention of engaging in political discussions during our reunion. Although it’s an election year, there's too little time to see too many people. By definition, a reunion is intended to reunite us, not divide us. I urge everyone to leave their political views at the door. Jan’s even considering installing a sign at the entrance urging exactly that.

Reason #4: Health or financial difficulties. I have no response to those reasons other than to express my sincere hope that all will overcome them as quickly as possible. You’re all in my thoughts, and will not be forgotten next month. Many of us have promised to inundate this Facebook page with photos.

Like many of you, I thought I’d see some of my fellow classmates some other time, one perhaps more convenient to me. That’s a mistake. Two years ago, I put off seeing a dear friend, and planned to visit him on his birthday. He died only hours before that was possible. Same thing with my eldest brother, who lapsed into a coma only hours before I arrived in La Crosse last year to see him. He never awakened.

There’s no better opportunity than a reunion to renew acquaintances or begin new ones. Just ask some of those who have been attending mini-reunions for the past two years.

This message is NOT intended to pressure anyone. I hate being pressured, and hate even more pressuring others. Rather, this is merely an open message to others who, like me, have wavered about attending this gathering. I made up my mind to do so only a couple weeks ago. The two Nancys and JoAnn have only solidified my decision.

I’d like to see as many of you as possible that weekend. If you’re still a fence-sitter like I was, or have decided to stay home, I only ask that you think about that choice just once more. There’s no better time to do so, I assure you.

And you know what? There's never more time.

I asked Ted why he has put so many hours into the class Facebook site. He gave me three reasons:
- "I retired earlier than I thought I would, and I was bored."
- "I like to find treasure."
- "I think all journalists like to do good in the world."

Ted created the Facebook site that led to the lunches that led to the reunion that led to laughter and some tender reminiscences. Some of us found treasure, or at least decided we weren't so fat after all. And Ted, you did good in the world.


Gail Grenier is the author of Young Voices from Wild Milwaukee, Dog Woman, Dessert First, Don't Worry Baby, and Calling All Horses, all available on Amazon.com.
Posted by Gail Grenier at 2:58 PM