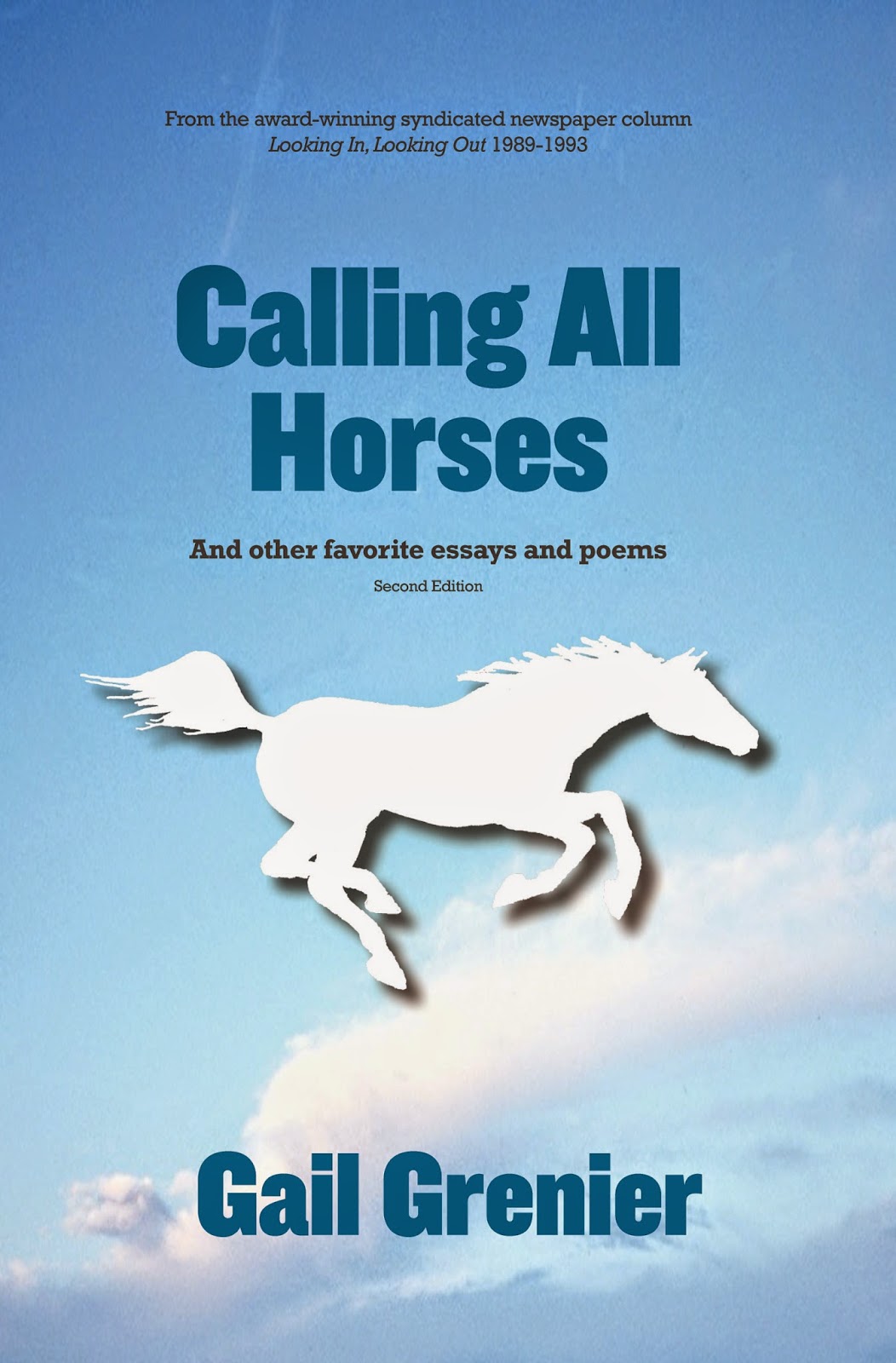 I'm happy to announce the publication of the second edition of my first book, Calling All Horses. I have added and rearranged a few things inside the book, and there's a cool new cover designed by Karen Cluppert of Not Just Words. I offer the book for $0.99 on Kindle and $8.99 as a paperback through Amazon.com. Like my most recent book, Dessert First, it's full of slices of life - a nice book to pick up and read before bed. Here is a summer-y excerpt from the book, first published in 1993:

We just came back from six days at Long Lake and I can still feel the aaaahhhhhhhhhh of it.


Almost as far back as I can remember, I've gone to a lake cottage in summer. It was a tradition with my family as I grew up, and now Mike and I carry on the tradition with our own children. I love everything about a lake, even the smell of boat motor fuel. It's unbelievable what a lake does for me. This August I went to Long Lake so depressed that I wondered if I'd be able to enjoy the vacation. But after an hour or two there, I had a new head and new skin. I wonder if the sound and smell and sight of the moving waters soothe my soul because somewhere inside me is a baby who remembers swimming in utero for nine months.

In a place with no clock, phone or TV, we have a number of sacred inviolable traditions, and to my delight this year they seemed important to our oldest, who is seventeen. He kept reminding us what we had to do.

Cottage traditions include things like Nutter Butter cookies, Canasta and chess, bicycling and canoeing, fishing, visiting Grandma's old farmstead and grave in St. Michael's, the guys playing pool at the local pub, and daily naps, often outside. We all compete for the Laziness Award. (Of course, this would not be possible if we owned the cottage!)

Being at the lake unlocks decades of good memories for me, including first exploits fishing with my dad in rented wooden boats. We'd fish in the dark for hours, by feel, without bobbers.

The first cottage I remember, at Okauchee Lake, was a humble basement dwelling. There were thirty-one steps to the outhouse. Eventually, my folks settled at a Beaver Lake cottage year after year. Likewise, after trying four different cottages, Mike and I have stuck with Long Lake since 1985. When you go to the same place every year, it's more homelike and easier for you to immediately forget the so-called "real world."

I remember being a teenage girl at Beaver Lake. I had a special place I went to – my dreaming spot. It was on a rickety wooden walkway built alongside an old boathouse. I'd stand there alone and quiet with the boathouse at my back and the lake before me. No one could see me.

I could predict weather by the color and action of the water. I knew for sure when a storm was brewing. I wonder how many times I stood in a downpour, leaning against the boathouse, getting soaked gloriously to the skin, watching the rain pound the black waters and the sky put on a fierce show. The wildly fresh air filled my nose and throat and I'd feel emotions that I couldn't name.

Beaver Lake in those days was so clear that you could look down five or six feet and see the many colors of pebbles at the bottom. One year I gazed down and spotted a beautiful sterling silver ring formed by adjoining flying doves. To my delight it fit my ring finger perfectly.

I wore the ring constantly after that – until a day the following summer when I was once again swimming in Beaver Lake and the ring slipped off my finger. No amount of searching could retrieve it.
I came to believe that what the lake gave, the lake reclaimed. For me, the lake truly had a personality during those tender summers. It seemed perfectly plausible that the lake, as some sort of nameless being, granted me the ring and then took it back. I wondered who next received the gift.

There's a romanticism about a lake. You can feel a longing and passion just beneath its placid surface. No wonder the lake spoke to me when I was a teenager, and does still.

I wonder what the lake says to my children. Long after these days of lying idly on a warm pier and watching water drops sparkle on a perfect spider web, they will have lake memories.
Posted by Gail Grenier at 8:50 AM