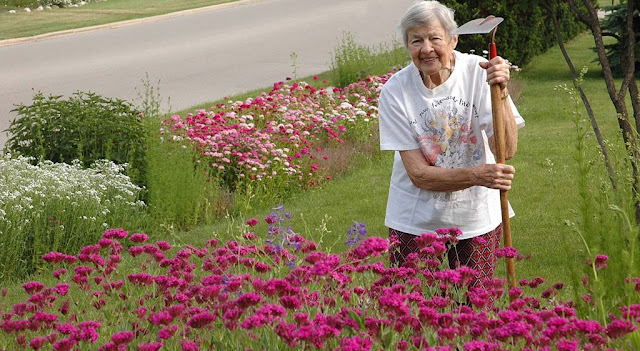 I had the privilege of knowing Malinda Beck for almost 30 years. She was the remarkable mother of my friend Pauline Beck. Here is the eulogy Pauline wrote for her mother.... 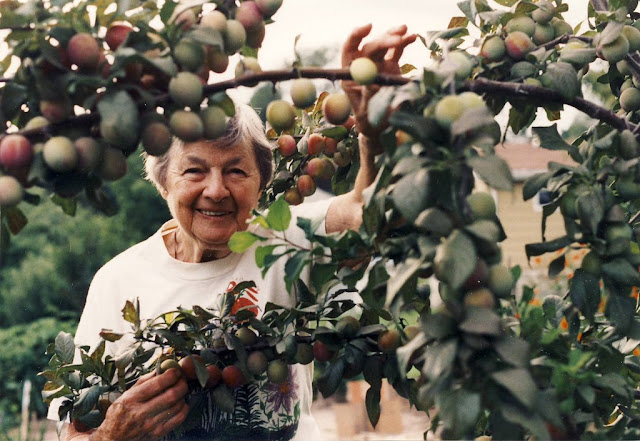 Yesterday, two of Malinda’s granddaughters and I gathered to work on her picture boards. It was a daunting task.


We were trying to chronicle someone’s life that spanned almost a century.  Seventeen different US presidents served during her lifetime.


There was plenty material for the board, as she was wonderfully photogenic. Even at the end, during the four years she was at River Way Place assisted living – she still was engaged in life, and there was plenty to record. Time had slowed, and my brother and I learned to enjoy the simpler things along with her – the rambunctious squirrels outside her window, the glistening Milwaukee River she could see in winter through leaf-less trees, the pretty decorations on everyone’s door.


My niece was amazed at all that her grandma had accomplished in her life, and we started wondering: What will be on our boards, some day? How will people measure us, and chronicle our time on earth?


We all complain that we lead such busy lives these days.


But here was a woman who, with her husband, raised five children, made all their meals from scratch, serving home-canned and home-frozen fruits and vegetables that they grew themselves – sewed some of their clothes – kept the house clean -- did the laundry with a wringer washer her entire life – and had two acres that she and her husband truck-gardened, selling the produce to drive-up customers and to grocery stores.


Daddy had a full-time job at the West Bend Co., so Mom did most of the chores during the day, and he worked on the garden and orchard in the evenings. It seems amazing – but not unlike the stories that many of our other relatives could tell.


And it wasn’t just all work and no play – you can see by the boards that Malinda had many hobbies and interests.


It was work, though, that gave her life meaning. She always had lists of jobs she needed to do that day, and it gave her purpose, even when she was in her 90s. Her neighbor, Paul Frings, would call over from his backyard: “Malinda! How’s that list coming today?!”


Sometimes when I was visiting Mom, my sister would call, and couldn’t reach us. When she did get through, she’d ask where the heck we were -- it was dark outside!


Mom would reply that we were working in the flowerbed next to the curb, under the street light. My friend Bo, who grew up in the South, would say: She worked from can to cain’t.  Sunrise to sundown.


When she was in her mid-80s, I remember that she called me once, and was relaying to me what she’d all done the other day. She ate breakfast and cleaned up the house a little, did a load of wash and hung it out to dry, watered some new transplants, thinned out the carrots…and then she decided to run out to Bernie’s since it was a calm day with little wind – ideal for spraying their potatoes. They were up north, and she had said she’d check on their garden for them. So, I hear all this, and think, well, she had quite a day…busier than I’d been.


Then she said: “After I left Bernie’s house, I stopped at Fleet Farm. I was on that end of town anyway, and wanted to pick up a few things. But,” she said, “they weren’t open.”


I was wracking my brain, trying to think what had happened that day - - was it a holiday? I asked, “Why were they closed?”


Achhhhh! I couldn’t believe it! She’d done all of that work before the stores were even opened.


I found an old note, where I’d written someone that Mom said she was slowing down a bit in 2004. But that spring, when she was almost 90, she took down her own snow fence, pulling out the tall metal posts, rolling it all up, and getting it over to where she stored it.


I probably will never emulate Mom’s work habits, at least not to that extent – but I hope to have her same zest for life, and the ability to look at things with fresh eyes.

We were driving up to my sister’s cottage one day, and we both looked to the west. It was one of those sunsets you see when it’s a humid, sultry summer day. The sun was a hazy red pearl, just suspended above the horizon. I noticed that she was sitting on the edge of her seat, staring at it out the car window. She said, “I’ve never seen anything like that!”


And I thought, holy mackerel, to be in her mid-80s and still be excited by a sight in nature. I hope I can always view my world as fresh and new.


One Christmas, my husband and I bought her a clock – it wasn’t digital, it had hands – but it was one of those that changed time automatically for daylight-savings time. She was flabbergasted; she didn’t know technology like that existed.


When fall came, and the clock was going to lose an hour, she knew that those hands would have to go around forwards through 11 hours to straighten itself out. So she got up in the middle of the night – waited about an hour in the kitchen, and then was rewarded with that magical action – watching those hands moving around and around the clock face, all on their own. She said she got to see “time fly.” I loved her wonderment about life.


Reflecting on Malinda, maybe you’ll wonder about your own picture boards, what will be on them to summarize your life…and will you be sitting on the edge of your seat, at some new sight, saying: “I never saw such a thing!”

I’ll conclude with something Mom would say, if she were remarking on her own death. It was something she’d always say, when someone elderly had died: “Well, she lived her life!”

Email ThisBlogThis!Share to TwitterShare to FacebookShare to Pinterest
Labels: an old woman full of life, Malinda Beck eulogy, story of a remarkable life