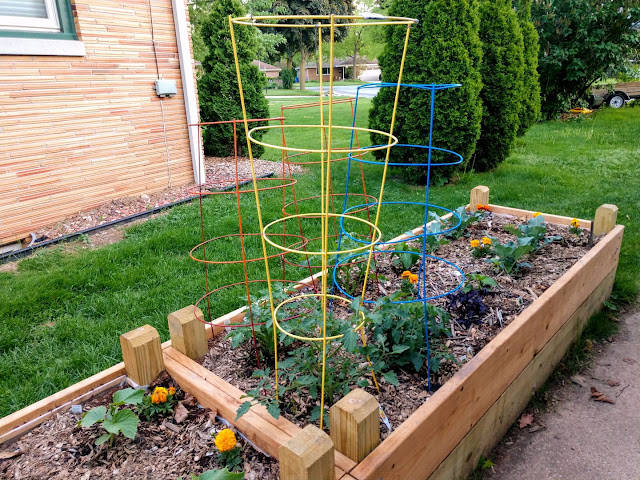 I’m not sure what started my husband’s venture into raised-bed gardening and Hügelkultur, but I’m going to blame YouTube and our neighbors Josiah and Iman.

In the years since we bought our first home in 1974, Mike has planted many vegetable gardens. I cheered him on and helped him eat the food.

Our high tide of gardening was during the 1980s, when we canned 300 jars of applesauce, tomato sauce, and various fruits. We lived on 10 acres in Menomonee Falls, and Mike’s gardens spanned an area 120 feet long by 15 feet wide. He divided that space into three 40-foot plots, rotating two sown and one fallow. He religiously followed the precepts of his “bibles” of organic gardening: Ruth Stout’s No-Work Gardening Method, Mel Bartholomew’s Square Food Gardening, and his favorite, Samuel Ogden’s Step by Step to Organic Vegetable Growing.

In time, I asked Mike to please stop planting. Our family had grown to three children and our summers were consumed with kid stuff. Mike’s gardening method had become simple, as he described it: throw some plants in the ground and say, “See ya in fall.” The result was that we grew a lot of weeds . . . not recommended by any of his gardening gurus.

In 2015, we downsized from our mini-farm to the City of Milwaukee, where we both grew up. Our lot is large for the city, nearly a half-acre, but tiny compared to what we were used to. Maybe it was the smallness of our “land” that got Mike back into gardening. In the flower beds along the sides and back of our house, he planted tomatoes, chives, cucumbers, and rhubarb. This was a controlled – and controllable – area. The beds were skinny and weeds few.

Meanwhile, we noticed some chickens in a back yard just down the street. Feeling nostalgic for the chickens we used to keep, I introduced myself to our neighbors Josiah and Iman. They raise hens for eggs, along with a lot of vegetables, on a lot smaller than ours. I admired their raised vegetable beds and composting system.

I realize now that our neighbor’s gardens started me on what has become a five-year gardening project-creep. . . . .

·   I asked my son and his wife for a composting bin for Christmas. Thanks, Charlie and Katie.

·   I took a free composting class through the City of Milwaukee and the Sixteenth Street Community Health Center. Thanks, City and Center.

·   I became obsessed with the science and adventure of composting. Thanks, micro-organisms that turn garbage into soil.

·   We got a free rain barrel and rain barrel class through the Milwaukee Metropolitan Sewerage District. Thanks, MMSD.

·   I asked our handyman if he could build us a raised bed. (Mike is beyond busy with his job, and I'm no carpenter.) Thanks, Handyman Jeff.

Mike was all for my forays into what was previously his exclusive organic gardening territory. Little did I know that while I busied myself with compost and rain barrel and raised bed construction, Mike was up to his own intrigue, one he hid from me. For weeks each evening before he fell asleep, he snuggled with his smart phone and surfed the Web for information about raised garden beds. No longer a disciple of Ruth Stout, Mel Bartholomew, and Sam Ogden, Mike had become a YouTube man.

By the time the 200 lbs or more of raised-bed lumber had been bolted into place, Mike was prepared to dive into a new way of growing vegetables: Hügelkultur.

Hügelkultur is a centuries-old system of gardening based in Germany and Eastern Europe. The word means “mound culture” or “hill culture.” The theory, as Mike explained to me, is simple: you build your garden on a bed of logs, sticks and leaves. That base becomes a “well” that tends to hold water. As the logs and sticks decompose, they release nutrients into the garden.

Hügelkultur is controversial. It doesn’t always work, for a number of reasons. Sometimes the mound breaks apart, freeing the logs to roll down the hill and smash into buildings. Some argue that the logs rob nutrients rather than build them. And the wood could harbor insects that infest your vegetables. But the theory is logical, based on the rich and varied ecosystem that springs from organic debris on a forest floor.

Once Mike explained Hügelkultur to me, I felt excited to try it. He was eager too, maybe in part because, like many men, he loves gadgets and gimmicks. He told me he hadn’t felt this excited about gardening in decades (probably since I begged him to please stop back when our kids were young).

We were working within a wooden framework, not building a garden on a hill, yet the basic principle of Hügelkultur is at work in our new garden. Like traditional Hügelkultur done on a hill, the roots in our garden have enough room in the topmost layer. Vegetable roots don't go down very deep, Mike explained to me. The wood in the bottom level is good for worms and other creatures that help create healthy soil.

Hügelkultur does not traditionally include the trench we added, but Mike got sold on the idea after seeing a YouTube video about it. He likes the fact that if the soil becomes saturated after days of torrential rain, excess water can drain out of the trench from the sides.

Here is a photo diary of the steps we took: 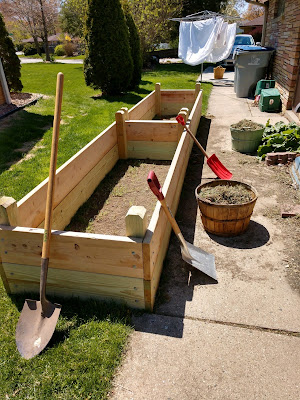 1. The small area between our house and the house next door gets the most sun in our yard, so we set the garden there. We designed the beds as big as we could while leaving room for the lawn mower to pass; that gave us two beds each measuring 3 feet by 8 feet. We decided to use the height of two 2x12s. At first Mike wanted to go just one board high, but decided on two boards after opting for Hügelkultur - we'd need the bottom level for logs and sticks. Plus the higher bed would make gardening easier for our old backs. The bottom level is comprised of treated lumber. The top level is untreated, to avoid having the chemicals interact with our vegetables. I rubbed linseed oil all over the top boards to protect the wood (raw linseed oil was recommended but we could only find boiled linseed oil). 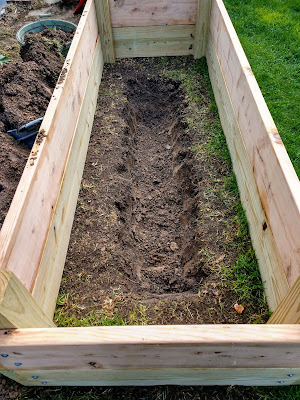 2. We dug a trench in each bed, about one foot deep. We saved the soil for later. 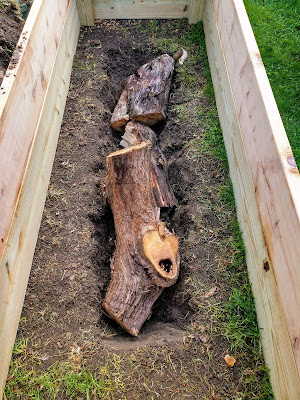 3. We had trimmed a tree last year, and saved the logs for firewood. They were a perfect fit for our trench. 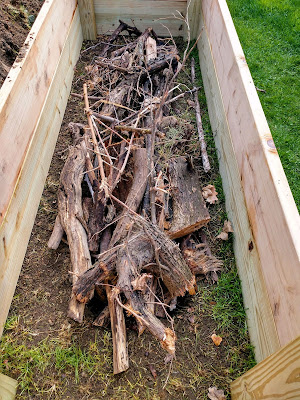 4. We added sticks that were lying around the yard after winter. 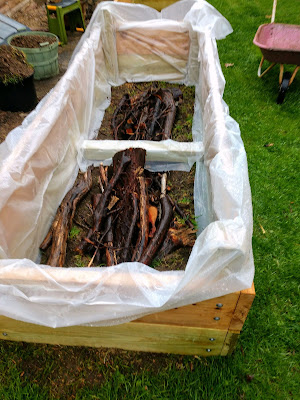 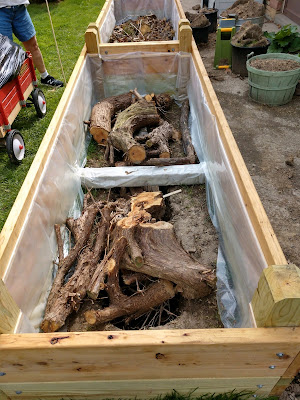 6. We nailed furring strips along the top of the boxes, to hold the plastic. Then we wrapped the extra plastic down over the furring strips for extra protection for the wood and veggies. 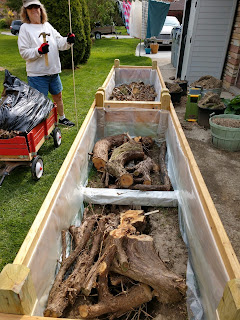 7. We started to drag bags of debris we had gathered from a neighbor's curb,14 bags in all. Thank you neighbor, and thank you little red wagon. We weren't sure what was inside the bags the neighbor had set out for City pick-up, but we figured they contained usable sticks and leaves. Mike was originally planning to take our trailer and pick up branches left out by neighbors, then break them up himself. Hauling bulging lawn-and-leaf bags was much easier than creating our own debris. 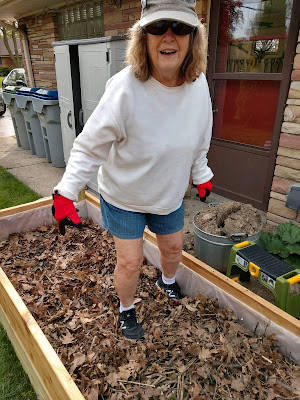 8. The 14 bags were indeed full of usable leaves and twigs. Once we dumped them, we stomped them. It was strange to come upon pockets where we'd sink down. I wondered if stomping grapes might feel a bit like this. (Sorry there are no pix of Mike. He was determined to document our effort and now I'm glad he did, so I could share this.) 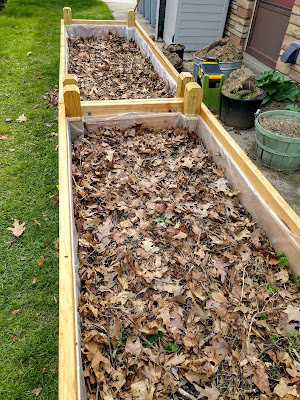 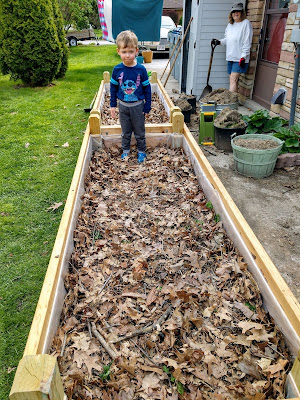 10. A little more stomping by our grandson Max. 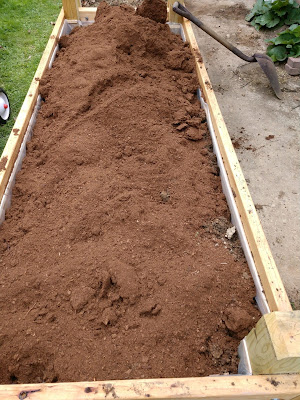 11. Next, we added the dirt we had taken out when we dug the trenches. We mixed peat moss with that soil. 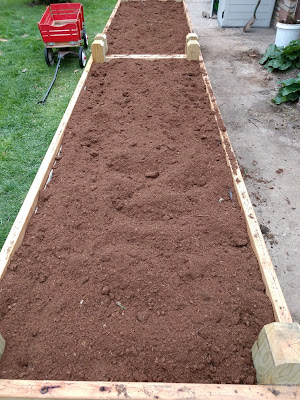 12. We topped it all off with another layer of peat moss to retain moisture. 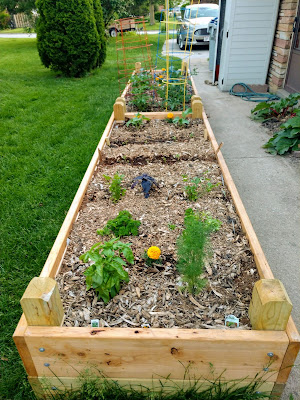 13. Adding our own compost as he went along, Mike planted peppers, tomatoes, cucumbers, broccoli, beans, radishes, and "companion plants" marigolds, basil, cilantro, dill, and parsley. He used a modified square foot garden approach, setting the plants fairly close because we don't need a path between them; we can reach them from each side. He surrounded the veggies, herbs and flowers with shredded mulch from our neighbors' felled tree, to hold moisture. (Thank you Gretchen and Jim!) Last, he painted some rusty metal cages red, orange, and blue and propped them around the tomatoes. Adding bright bits of color is based on his Romanian ancestry, not any advice from YouTube.

It's only been two and a half weeks since Mike planted the garden, and it's going great. The bean seeds he and our grandson stuck into the ground sprouted and grew like something out of "Jack and the Beanstalk." I haven't seen a weed yet, but the garden is right outside our side door and high off the ground, so it'll be easy for me to attack interlopers. I may not be a planter, but I really like weeding.

If we had needed to buy gardening soil to fill those two big boxes, we would have spent a bunch of money and done a lot of back-breaking schlepping. The frame cost about $385 for lumber, bolts, and our handyman's labor. Add some bucks for linseed oil, peat moss, seeds and starter plants. We won't harvest $400 worth of vegetables this season, but at 70 years old, we two have some years of sowing and reaping ahead of us, Lord willing and the Kinnickinnic River across the street don't rise.

Anyone who does gardening knows you don't plant a garden just to save money. You do it to eat the freshest, most delicious organic food. You do it to watch beautiful plants grow. You do it to be a partner in God's creation. There's a lot of satisfaction in that.

Gail Grenier is the author of Dog Woman, Don't Worry Baby, Dessert First, Calling All Horses, and Young Voices From Wild Milwaukee, all available on Amazon.com. Proceeds are shared with local charities.