Bill Bryson's Thunderbolt: It's to LAUGH! 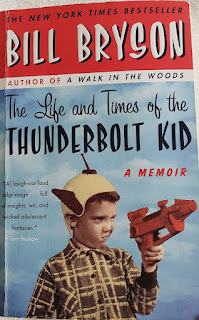 If humor is what you’re pining for, I’ve got the remedy. I have never laughed so hard and so often reading a book as when I read The Life and Times of the Thunderbolt Kid by Bill Bryson. His memories of growing up in the Midwest during the 1950s are gutsy and irreverent, true to life but often exaggerated for comic effect. The memoir is a reminder that things really, really were REALLY different back then.

In spite of Bryson’s often raucous humor, the book left me feeling nostalgic about America’s Main Streets of old. I felt more moved than when I read Travels With Charley, where John Steinbeck recalls his trek around the United States, and laments the fact that thanks to the rise of chain businesses, cities had lost their unique flavors and come to blandly resemble each other.

Even if you aren’t a midwestern baby boomer like me, I think you’ll find Thunderbolt Kid hilarious. I’ll share some samples below. They’re a bit gross, but Bryson grew up a boy, and boys are made of greasy grimy gopher guts, you know.
___

[After hitting his head on a stone retaining wall] “When I stood up, I saw that everyone was staring at me with a single rapt expression and inclined to give me some space. . . . Naturally I couldn’t see what absorbed them, but I gather from later descriptions that it looked as if I had a lawn sprinkler plugged into the top of my head, spraying blood in all directions in a rather festive manner. . . . I bounded home in three steps and stepped into the kitchen, fountaining lavishly. . . .”
___

“I don’t know how they managed it, but the people responsible for the 1950s made a world in which pretty much everything was good for you. . . . X-rays were so benign that shoe stores installed special machines that used them to measure foot sizes, sending penetrating rays up through the soles of your feet and right out the top of your head. There wasn’t a particle of tissue within you that wasn’t bathed in their magical glow. No wonder you felt energized and ready for a new pair of Keds when you stepped down.”
___

“Most things that were supposed to be fun turned out not to be fun at all. Model making, for instance. . . . when you got the kit home and opened the box the contents turned out to be of a uniform leaden gray or olive green, consisting of perhaps sixty thousand tiny parts, some no larger than a proton, all attached in some organic, inseparable way to plastic stalks like swizzle sticks. The tubes of glue by contrast were the size of large pastry tubes. No matter how gently you depressed them they would blurp out a pint or so of a clear viscous goo whose one instinct was to attach itself to some foreign object – a human finger, the living-room drapes, the fur of a passing animal – and become an infinitely long string.”
___

“I probably wouldn’t have gone [to school] at all if it hadn’t been for mimeograph paper. Of all the tragic losses since the 1950s, mimeograph paper may be the greatest. With its rapturously fragrant, sweetly aromatic pale blue ink, mimeograph paper was literally intoxicating. Two deep drafts of a freshly run-off mimeograph worksheet and I would be the education system’s willing slave for up to seven hours.”
___

“[At the amusement park] Even the bumper cars were insanely lively. . . . The worst outcome was to be caught in a car that . . .  broke down altogether because forty other drivers, many of them small children who had never before had an opportunity to exact revenge on anything larger than a nervous toad, would fly into you with unbridled joy from every possible angle. I once saw a boy in a disabled car bale out while the ride was still running . . . and stagger dazedly through the heavy traffic for the periphery. As he set foot on the metal floor, more than two thousand crackling bluish strands of electricity leaped onto him from every direction, lighting him up like a paper lantern and turning him into a kind of living X-ray. You could see every bone in his body and most of his larger organs. Miraculously he managed to sidestep every car that came hurtling at him – and that was all of them, of course – and collapsed on the stubbly grass outside, where he lay smoking lightly from the top of his head and asked for someone to get word to his mom that he loved her. But apart from a permanent ringing in his ears he suffered no major damage, though the hands on his Zorro watch were forever frozen at ten after two.”
___

That last anecdote is classic Bryson. He tells you a story that is mostly true (definitely true to life), then draws the tale out to a logical, often exaggerated – and always funny – conclusion. There’s a rhythm to his telling that I find irresistible: he opens a scene, builds to a climax, then ties everything up with a satisfying coda.

You could do worse than enjoy a few laughs with Bill Bryson during this oh-so-strange COVID-19 time of life.

THANK YOU to the person who left the book in my Little Free Library!