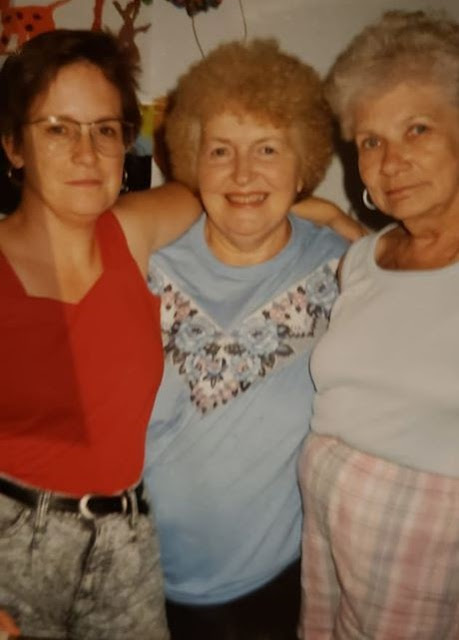 Before my mother became "Mum," she was Audrey, the country cousin on a farm in St. Michael's outside Kewaskum. Shirley was her city cousin in Milwaukee. They resembled each other, petite girls bubbling with laughter. Shirley and Audrey had no sisters and over their years of visits, they became more than sisters, the best of pals. They made their fun outdoors, exploring the barn, ice skating on the frozen river near the farm, or roller skating on sidewalks in Milwaukee.


When they became older teenagers, their joy was the jitterbug. Dancing led to romance for both of them. Audrey was maid of honor when Shirley married Al.
A young lady named Vi married Shirley’s brother Ray, and the small circle of cousins widened. Elegant, taller than Shirley and Audrey, and quieter, Vi had a dry wit. She liked to laugh and she fit right in.

Audrey married Ted, and the circle expanded. Audrey became my mother, eventually known to my siblings and me as "Mum." Shirley and Vi became young mothers. Now they made their fun indoors, playing cards – Sheepshead and Skat, Canasta and Bridge. The players around the tables shuffled every time someone married. Game nights expanded to two tables holding Mum and Pop, Vi and Ray, Shirley and Al, Mum’s brothers and their wives. Someone was always saying “Let’s go. Shuffle,” and they got down to business.
Shirley and Vi may have been in the family line of first cousins to my mother, but to us kids, they were simply aunts (we called Shirley “Aunt Shirley” and Vi was simply “Vi;” I never understood why). We saw them nearly as often as we saw our true aunts and uncles. And we played with our second cousins nearly as often as we played with our first cousins.

Talk about a gang! It was wild fun to be a kid in the Fifties. Ray and Vi had five kids. Shirley and Al had nine who survived. I was the oldest of five, and we had eight first cousins.

All those kids were spaced in age like steps in a stairway and there was someone for everyone (although my brother David complained that there was no one exactly on his “step”). We played hard and loud, tearing around the house. One uncle always shouted, “Go outside!” And we did – ice skating in winter, playing flashlight tag in summer. If our parents hosted, we had an extra treat before breakfast the next morning, when we snitched whatever chocolate-covered peanut
Bridge mix we found left over on the tables.

We were all city kids growing up in Milwaukee except for Ray and Vi’s kids, who grew up in a farm house in Menomonee Falls. We had great fun exploring their big old barn, a world unto itself.

The card games continued as we oldest kids grew through our teen years and into young adulthood. The aunts and uncles always got down to business, with plenty of “Let’s go. Shuffle.” I married and had two children, like most of my cousins and second cousins. All the aunts and uncles gathered at weddings for dancing and – sometimes – games of cards.

Then in 1978, the games were fractured when my folks were killed in a car accident, Mum at age 48 and Pop at 51. The grief of my uncles and aunts was so tender, so palpable, that I can feel it even now as I write this, 41 years later. It was like something had been taken from their own bodies. Unspeakable. The accident shuffled the players abruptly, and I know it took my aunts and uncles a long time to get their bearings.

The accident had an unexpected effect on my card-playing life. Unlike my parents and aunts and uncles, I had no “card sense” and didn’t love cards. I never did master Sheepshead or Skat or Bridge, where you have to pay attention to the cards that have been played – and remember them. After my folks died, I took my two sons and visited my grandmother every week. Grandma was grieving her daughter and I was grieving my mother; it felt right to be together. When Grandma offered to teach me Canasta, I reluctantly gave it a try and found that I liked playing cards after all. Once in a while I had the bonus of seeing my 80-year-old grandmother giggle like a school girl when she got all four red threes in Canasta.

When the boys got old enough, Grandma and I played Crazy Eights with them. She too liked to get down to business, and no one could shuffle like Grandma could. The boys and I watched mesmerized as the cards made gentle “woosh” sounds in her swiftly-moving hands. They still remember, even though those games ended in 1985 when Grandma died.

In the 1990s, our family began having summer reunion picnics and I discovered that my parents’ cousin card games had survived even if Mum and Pop had not. I felt glad about that.
Our reunions got smaller as the old folks died – the men first – causing a continuous and gradual shuffling of the players at the table. As of a year ago, the only ones left of that older generation were one “true” aunt plus Shirley and Vi.

As they grew into old age, their friendship blossomed into a love far beyond being sisters-in-law.
I didn’t see Shirley and Vi often, but they’d show up from time to time at reunions, where they’d join whatever card game was going on. I still heard the echo (now quieter) “Let’s go. Shuffle.”
When I visited with Shirley and Vi, it always felt like putting on a comfortable pair of shoes. Shirley was still bubbly, Vi still quieter, both always ready to laugh. When we talked, I felt wrapped in a cozy shawl of love. I’m sure part of that shawl was the age-old love they had for my parents and for the “old gang.” I was somehow part of the gang even though I had never joined their games.

Around New Year’s this year, Shirley and Vi both went into hospice. Shirley was 92 and Vi was 91. I got to visit Vi on the last day she was able to speak normally. Despite not feeling good, she still had that dry wit I loved. I got to tell her I loved her. And she told me back. I called her “Aunt” for the first time.

I didn’t get to visit Aunt Shirley because, as her daughter told me later, Shirley was too occupied, talking incessantly (maybe speaking to cousinly spirits waiting for her at the heavenly card table). I didn’t get to tell Aunt Shirley that I loved her, but I know she knew.

This is how I imagine their last conversation, spoken by their spirits who were already free of their tired old bodies:

Gail Grenier is the author of Dog Woman, Don't Worry Baby, Calling All Horses, Dessert First, and Voices from Wild Milwaukee, all available at Amazon.com.