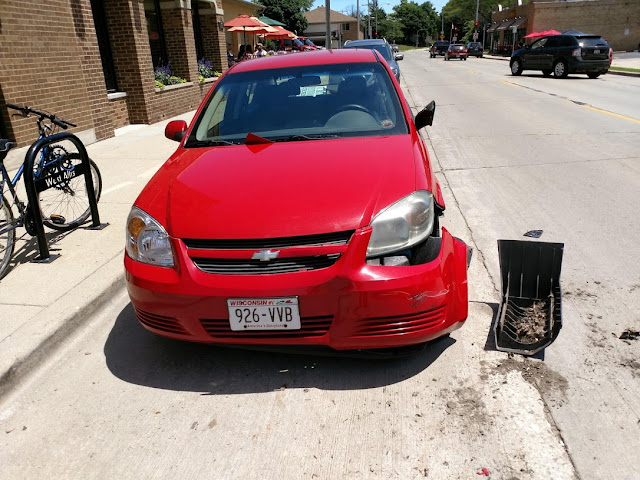 Yesterday I invited my friend Mary to brunch. It turned out to be brunch and crunch when a Milwaukee county bus clipped her car.


Five friends joined Mary and me on the outing, three of them passengers in Mary's car. Mary chose the spot; it was my first time at West Allis Cheese & Sausage Shoppe, on the corner of 68th and Becher Streets. Cute place - a cross between a deli and a Starbucks, with a nice side store selling adult beverages plus summer sausage and Wisconsin cheese (no lie, my mouth is watering as I type this). 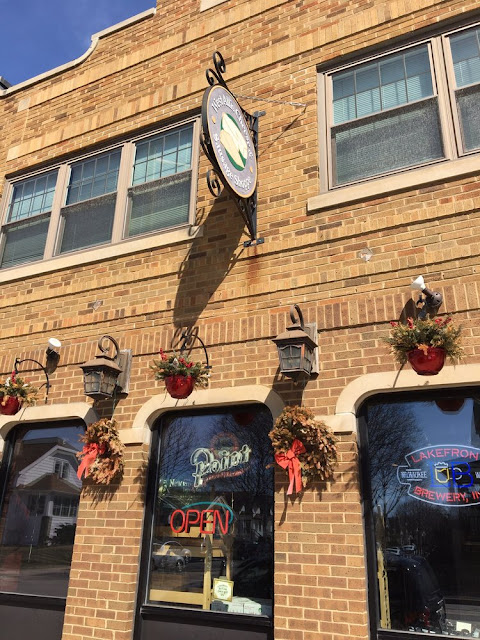 The place was filled with a noon-time rush, and our group wound up standing at various points in line. Mary had just ordered her egg dish and sat down at our table when a man entered the dining area and asked, "Does anyone own that little red car parked outside?" (heart thump)

Mary said yes and the man told her a bus just hit her car.

She jumped up, ran outside, and discovered that the bus, in turning left, had swung wide and clipped her left front bumper, which now dangled like a loose tooth. The bus was nowhere to be seen.

It was a perfect summer Sunday, and neighbors had been enjoying the morning on a lawn just opposite the store. Therefore Mary had a group of witnesses to the incident. She crossed the street and joined them; they provided a play-by-play.

I'd been in line to make my order, unaware of the drama. By the time I learned of it and got outside, Mary was already laughing with the group of neighbors. I couldn't hear what was being said, but I knew everything would be all right when I saw her smiling.

Mary's one of those glass-half-full type people. After she rejoined me in the store and waited for the police to arrive, she kept repeating things about "the kindness of strangers," the famous phrase from "A Streetcar Named Desire." Streetcar - bus - a funny connection I guess.

- After the neighbors saw the accident, one of them chased the bus after it made its turn, and stopped it. (It's possible that the bus driver was searching for a place to stop; the street was parked up pretty tightly.)

- A man, just leaving West Allis Cheese & Sausage Shoppe, saw what had happened and figured the damaged vehicle might belong to someone inside. He's the one who took the time to return and call out for the owner of the little red car.

- At one point Mary had to go outside to talk to the police. Good-natured to the end, she called back to me with a big smile, "Don't let my food get cold!" When the waitress delivered it, I asked her if she could keep the food warm and explained why. She did.

- When the officers arrived, neighbors were available to make statements.

- When everything was over, Mary's car was judged fit to drive temporarily and her bumper was re-attached with a bunch of pieces of black tape. The black-on-red patchwork 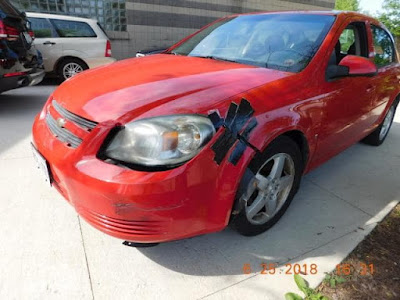 was done by the man who had first hailed Mary from the restaurant. Turns out, he's a mechanic who always keeps duct tape in his car. He hung around until all the reporting was done. His handiwork warmed the heart of this duct tape lover.


- Mary had no idea where to take her battered car, and that same man recommended an excellent family-owned repair shop nearby. Mary went the next day, and she was thrilled with how she was treated.

I agree with Mary that the bad day was full of the kindness of strangers. I have seen this kind of behavior a lot since moving to the Milwaukee area about two years ago. (Half of West Allis is enveloped by Milwaukee.) Mike, my husband, says people here must take "nice pills." That's how it felt yesterday.

One note: as I ate my meal, I had a ringside view of the sidewalk near Mary's car. At one point, a young women stood there talking into her cell phone and gesturing as if angry and amazed. I think she was making a video log post about the accident. I'll bet that young vlogger didn't come up with a story about the kindness of strangers.

Another note: As Mary picked up pieces of her car, she found her mirror in her windshield wiper. There was another huge, heavy piece of rubber lying ingloriously on the street. When the transit company representative arrived, she asked him what part of her car that was. He said, "That's not from your car. That's from the bus." 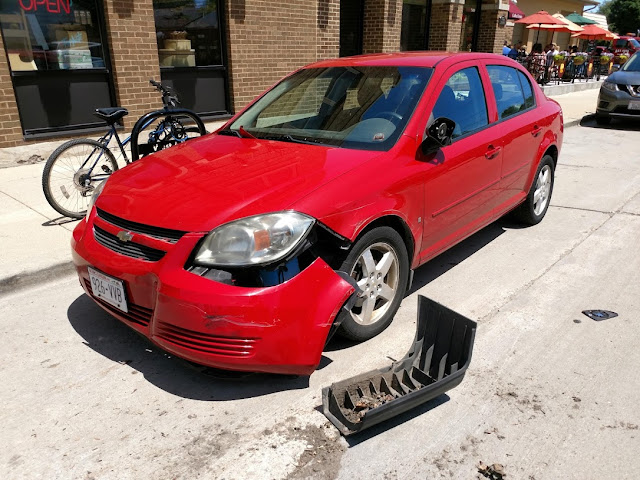 As we seven friends sat in the dining area, we marveled that neither Mary nor any one of her passengers was standing beside the car when it was hit. That was the best part, really, of a bad day.

I talked to Mary today, the Monday after the accident. I said, "This is one accident where you don't have whiplash."

She laughed and agreed with me, saying, "An angel helped me out. It happens so frequently."

For some people, that accident would have ruined their week. For someone like Mary, who looks on the bright side, it became an opportunity to count blessings.


Gail Grenier is the author of Young Voices from Wild Milwaukee, Dog Woman, Don't Worry Baby, Dessert First, and Calling All Horses, all available on Amazon.com.

Email ThisBlogThis!Share to TwitterShare to FacebookShare to Pinterest
Labels: kindness of strangers, looking on the bright side, Milwaukee buses, West Allis Wisconsin