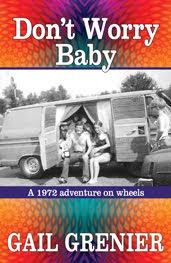 I just looked up my name on Google and found this old blog post I put up on another site in 2005 I think it was. The story still makes me laugh. I used it as the start to my novel Don't Worry Baby. Here's the old blog post . . . .

It was Monday, August 14, 1972, and Mike and I had just gotten married on Saturday. We were headed to Holy Hill for our honeymoon.

The real reason for our trip to Holy Hill was to test the van we had customized for our post-wedding odyssey. We knew that the first thing we were going to do after we got married was to blow this cold state. We were going to drive South and stop and look for jobs when it got warm enough for us. (Kind of an irony when it was 85 degrees in Milwaukee.) We had our college degrees, a thousand bucks, and a dream.

Earlier that summer, we had found a used 1962 Chevy Corvair van in the want ads, and bought it for $400. It was a utility van from the era before luxury liner vans. It was painted a sort of dark shade of green not quite as pretty as army green. It had no cup holders and no windows on the sides. It had a rear engine and a stick shift, and usually three gears on the floor.

(We didn’t find out about that elusive second gear until a month later, somewhere in the Ozarks... where that rear engine kept us from blowing up... but that’s another story).

Mike’s parents, Jerry and Lenora, were handy. They helped us customize the van. We made it our little traveling house. Jerry devised a plywood platform for our mattress. ("More bounce per ounce," he said to Mike during the construction - probably the dirtiest thing Jerry ever said to his son.) You could flip the plywood upward and fasten it by a hook to the ceiling. Then a little table would pop out for eating. We had a couple of card table chairs to sit at the table. Jerry snapped nylon screening to the opening made by the van’s two side doors, and Lenora sewed a zipper into the screen so we could sleep in breezy comfort on a summer evening.

I decorated the ceiling of the van with psychedelic fabric I had found - blue, yellow, orange and green stars and rainbows. I even made a pillow to match.

We kept our clothes in a little dresser left over from Mike’s babyhood. In the way back of the van were small shelves where we kept a camp cook set we had found at Sherper’s Army surplus store, along with our library, which consisted of the Holy Bible and the complete works of J.D. Salinger. We had a gas camp cooker and a toilet seat on folding legs that we stashed in back somewhere. We were set.

We spent so much time getting our van ready that we completely forgot about planning a honeymoon, much less lodging for the first night of our marriage. I told Mike to book the closest hotel to our wedding reception because I knew we wouldn’t feel like driving far. He booked a night at the Suburban Hotel. Our friend Gail Hills was horrified. "That’s where people go for an hour," she said. "That’s a real ‘Squeaky Springs Hotel’."

Well, the Suburban was fine for us — we weren’t noticing our surroundings that night. As I recall, we did everything except couple from the chandelier. Finally! Sex was legal!

We opened our gifts on Sunday (I remember my grandmother 'Mémère' saying "What happened to you, Gail?" looking forlornly at my bosom. "I wore a padded bra under my wedding dress, Mémère ," I explained.)

Then Monday, it was time to test drive the van. Mike had suggested taking a little camping honeymoon at Holy Hill, where he had camped as a boy scout. Sounded fine with me. Someone gave us a gallon of wine, and we were ready to go.

We made it to Holy Hill with no trouble. Mike rang the bell and asked one of the friars if we could camp for a few days at the base of the hill, right near the start of the Stations. "Gee, I don’t know," the friar said, "I’ll have to ask the cook."

The cook said yes, and our Holy Hill honeymoon began.

The weather was balmy, we were all alone, the air was fresh and the trees bursting with August. We wandered through the woods, happy with our peace and quiet. We shared a hearty meal of ground beef, cream of mushroom soup, and canned corn, a "Michael meal" from Mike’s college apartment days. We drank some wine. I don’t remember using the plastic toilet seat on folding legs, but I must have, since there are no restrooms at the base of Holy Hill. Everything was perfect except for the flies, but we had hung a strip of sticky flypaper just to the side of our love nest. We left the two van doors wide open and zipped shut our nylon screening, ready to enjoy a soft summer night.

But I couldn’t fall asleep. I lay there in the dark - and I do mean pitch black dark - there were no lights anywhere. All I could think about was the fact that we were surrounded by those big woods and all those big kettles and hills and surely there must be big bears wandering! Big bears could surely tear through our piddly little net and grab us and devour us, slowly, oh the thought of being eaten bit by bit -- it would be better just to be shot, you could get it over with right away. Being eaten would be such a LONG torture.

I got scareder and scareder of bears as Mike lay next to me snoring. Finally I woke him up. "Mike," I said, "I’m scared of BEARS!"

I don’t remember what he said, but somehow he assured me that there were no bears in these woods. Finally I joined him, spoon-style, in a deep, dark sleep.

The next thing I knew, there was a horrible pounding, pounding, pounding, and a bright light streaming through the black night right onto me and Mike. Mike always sleeps harder than I do, which means he wakes with more of a shock, and he jumped right up out of our little bed and hit his head on the ceiling and got his hand all entangled with the flypaper.

"What? What?" he mumbled, naked and disoriented.

"Police," said the voice behind the big beam of light.

Oh, man, this was like a bad flashback to the time of watching submarine races at the lakefront. We had to explain to the cop that we were newlyweds on our honeymoon and the friars had given us permission to camp there. The cop explained that neighbors had complained that night about bikers making a lot of noise in the area. Well, we hadn’t heard anything... not bikers, not bears -- nothing.

The cop finally left. Mike was humiliated about the whole naked flypaper thing, but eventually we fell again into a deep dark sleep.

When we woke, there was music and talking. Music and talking? What happened to the solitude of the night before? It was a Tuesday morning -- what could it be?

Mike and I gradually shook the sleep out of our heads and realized we were surrounded. We also realized our van was wide open and only a little screen separated us from whoever was out there. We slunk horizontally into our clothes, zipped open the screen, and walked out...
... into the middle of a Greek picnic. There were children playing, ladies preparing food, and lots of Greek men with fierce mustaches. No one spoke English, but somehow we figured out that this family came to the same site every year at the same time. They weren’t going to let a little thing like a parked, occupied van get in the way of their tradition.

We moved the van. And started our marriage.