Bullets have no eyes: Ken Burns and "The Vietnam War" 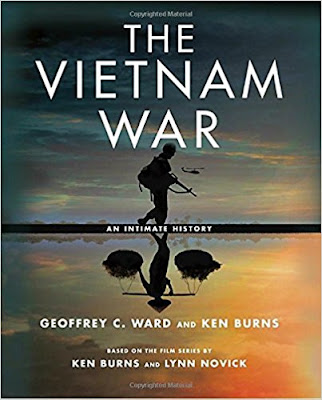 Can I watch this?


The Vietnam War helped to make me who I am today. I didn’t fight over there, but I fought here. I fought with my dad every day about the war. He was a “hawk” and I was a “dove.” We loved each other, but we fought. A lot of people at home fought about the war over there. It was a mini-civil war.

Because of the fighting at home and abroad, I decided to live my life trying not to fight. I have found that it is much easier to say “They shouldn’t fight over there” than to keep peace in one’s own family, one’s own neighborhood, one’s own workplace. Peace-making is a lifelong effort.


Last night I watched the first episode of the ten-part, eighteen-hour series "The Vietnam War" directed by Ken Burns and Lynn Novick. The first few minutes showed images of the war as I “knew” it, with famous film and still photos of American soldiers and civilians as well as Vietnamese soldiers and civilians. A lot of death. I had to keep fighting back tears and I thought, I may not be able to watch this.


But then the documentary settled into a mostly linear history lesson that showed Vietnam fraught with a century of struggle for freedom. Not only did the Vietnamese people fight their French colonial overlords, but they fought each other over politics and religion. The Chinese got involved, and the Japanese, and various Communist persuasions. The country was a snake pit.


Ken Burns takes the stand that the U.S. became involved in Vietnam mostly because of a misunderstanding. When Vietnam finally shed the French, it was a move for independence – which Americans should surely understand. We too had a colonial overlord in Britain. One of the most amazing sequences in the first episode is where you get a bird’s eye view of North Vietnamese fighters. You can’t see anything. Then they all move, and you realize they’re completely camouflaged. I came to admire their genius and their desire to be free. . . something I never thought of before.


Although Americans would naturally relate to a Vietnamese desire for freedom, the time of Vietnam independence was an era of rising fear of Communism in the West. The domino theory caught on: If we let one country fall to Communism, they will all fall just as a line of dominoes falls after you tap the first one.


The leader of Vietnam, Ho Chi Minh, was a Communist, and Americans branded all Communism as the same. Ironically, not long before the U.S. sent troops to fight Ho Chi Minh, we sent him military advisors – when we approved of his fight. It reminded me of how the U.S. armed Osama bin Laden before he became our enemy.


What I can’t figure out – and what I don’t think Ken Burns addressed – is why France wanted Vietnam in the first place. There was no mention of oil that I caught. I can’t imagine that France wanted Vietnam’s rice. Were their ports so valuable on the world stage? Or is the very aim of colonialism to acquire as many countries as possible, as if the globe is a giant Monopoly game?


Bullets have no eyes


Last winter I met a Vietnamese man who ran a beauty parlor. We got to talking about the war. “My father fought with the American soldiers against the Viet Cong,” he told me. “At one point, my whole family and all our neighbors hid inside a church to escape the violence. The Americans and South Vietnamese soldiers were shooting guns right outside the church.”


“That’s true, but bullets have no eyes,” he answered.


I am happy that along with the airing of this documentary, there is outreach to people who are suffering as a result of that long-ago war. Bullets have no eyes, and war casts long shadows. I hope to God that people will get help.


I thought Burns overdid the backwards running of famous sequences – the nine-year-old naked Phan Thi Kim Phuc running from Napalm, the Vietnamese man getting shot in the head, the Buddhist monk on fire, and others.


I also got tired of the flipping from a linear history before U.S. involvement to battle scenes with U.S. soldiers in, say,1969. I found the back-and-forth jarring. I think Burns did this to keep people interested. But I believe that anyone who watches the series is already interested.


We are still trying to understand.

Gail Grenier is the author of Dog Woman, Don't Worry Baby, Dessert First, and Calling All Horses, all available on Amazon.com.