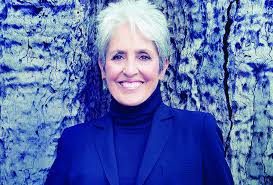 More than 30 years ago, my husband, Mike, and I saw Joan Baez in concert. So last spring, when I spotted an advertisement for her 75th birthday celebration tour, I jumped to buy tickets….


…. because I wanted to experience the comfort and joy of hearing her voice that spools out like silken thread….

…. because she’s a funny storyteller; I still remember two stories she shared decades ago…. She laughed about playing pretend shoot ‘em up with her son Gabriel. She knew that anecdote flew in the face of her reputation as a lifelong antiwar activist. She added that when her son grew up, he would probably have to see a shrink and complain, “My mother TAAAAAALLLLKED to me.” I recalled those two stories often as I raised my children….


…. because I wanted to hear her sing “Joe Hill.” That song haunts me – it’s a conversation between the singer and the deceased Joe Hill, a union agitator who became famous when he was framed for a murder and executed. In the song, the ghostly Joe Hill says, “I never died.” He explains, “What they forgot to kill went on to organize.” I’m not rabidly pro-union, but the lyrics give me chills, especially when I think about how children and their parents were treated like animals before unions brought rules to the workplace….


….. because I believe that if I can afford it, I should go see wonderful old entertainers before they die….


…. and because I think part of me wanted to take a trip back in time.


Mike and I drove with our friend AJ to the concert. AJ and I were excited. As we walked from the parking structure, we joked about “people of a certain age” who would surely fill the seats in the stately old Pabst Theatre. Women around us were joking about digging out their old bell bottoms for the concert – and knowing they’d never be able to squeeze into them.


Once in the theatre, I looked around the audience and was shocked to see two young men. I gestured covertly to AJ and whispered, “Hair pigment at nine o’clock.”


The lights went down. We quit talking and looked to the stage. Without announcement or ceremony, and with a brisk stride, Joan Baez entered, alone. Mid-pace, she kicked one leg high into the air. Seventy-five and still kicking. Slender and stunningly beautiful. Ms. Cheekbones.


People in the audience shouted, clapped, and rose. She had us in her hands.


The voice was as rich as I remembered it, a voice that’s hard to describe – certainly a soprano, but with rich and changing overtones. I wish I had the musical vocabulary to talk about it. A jewel in my ear.


The concert started off a bit slowly for me, and I thought about my brother-in-law Dale who refers to “The great folk scare of the 60s.” Dale is a hard rocker. I am not, but I agree that sometimes folk gets a bit too soft. I didn’t love all the songs she picked, but I loved the way she picked that guitar and I loved every warble of her heavenly voice. When she sang a song that didn’t move me particularly, I just listened to the lyrics, which were always thoughtful.


Gradually, I realized that she was singing through a sort of history of our country, from raw post-slavery times, to the ragged days when that darn old Vietnam War would not end, right up to today’s headlines.


She sang her own “Diamonds and Rust” (changing the end to “I’ll take the diamonds”). She spent most of the time giving her sometimes startling interpretation to songs written by others. Alfred Hayes’s “Joe Hill” was there, alive as you and me…Paul Robeson’s heart-rending “No More Auction Block”…Woody Guthrie’s sorrowful “Deportee”… Kris Kristofferson’s bluesy “Me and Bobby McGee”…along with thoughts of mortality in the searing “Another World” by Tom Waits. She belted traditionals like “House of the Rising Sun” and “Swing Low Sweet Chariot.”


Baez’s sassy humor was there in full force. She introduced her band as the “Bad hombres” and called herself “a nasty woman.” When she sang “Swing Low Sweet Chariot,” she changed the last words to “comin’ for to carry me – and you – and all of us – even Donald – home.”


She invited us to join her singing Bob Dylan songs, and the famous words floated to the gilded ceiling on the wings of our voices. Of Dylan, she said, “His manners suck but boy could he write.” I’m guessing she was referring to his silence after being awarded the Nobel Prize for literature. As she did in the concert we saw decades back, she aped Dylan’s bark perfectly on “Don’t Think Twice, It’s All Right.”


Her band was tiny but remarkable. The versatile Dirk Powell played banjo, guitar, fiddle, accordion, mandolin, and piano – and sang too. Last time I saw him was back in 2003 when he performed with Balfa Toujours, the Cajun band, at Folklore Village in Dodgeville, Wisconsin. Since then, I think he's played with just about every big name all over the world.

Baez’s son Gabriel Harris, all grown up now, did a fantastic job on percussion playing an assortment of drums, cymbals, bongos, and some kind of box.
Baez’s assistant (I believe Grace Stumberg) had a lovely companion voice providing harmony – and a bit of lead – on a few songs.


Always an activist, Baez chose The Innocence Project as the cause to promote during this tour. She explained simply and briefly what they do and why she believes in them. She added that everyone running for public office in our country, or any country, should spend a couple of days in prison, to get an idea of the base line.


For some reason, they had a smoke machine going throughout the concert. That and some pretty lighting were the only concession to “effects.” Joan Baez doesn’t need ‘em.


She gave us two encores and then made the “Night-night” gesture with her hands, as a proper grandma should. Mike and AJ and I enjoyed some wine in the lobby while we waited for the parking structure to empty out. We wandered onto the street, where a small group of people stood in vigil near Baez’s big tour bus. The roadies rolled out the equipment carts. We waited a bit…then left without seeing her.


Bye, Joan. Glad to have heard you again.

Gail Grenier is the author of Dog Woman, Don't Worry Baby, Calling All Horses, and Dessert First, all available from Amazon.com. (Links are to the right.)
Posted by Gail Grenier at 7:34 PM