It was the year 2000, the year I would turn fifty, and I was spoilin' for some grandchildren. I had a couple of married sons, but no babies were on the horizon. Children were up to them, their wives, and God. There was nothing for me to do but wait...and wait....

However, there was one way for me to get my "little kid fix." I could go back to teaching.

So I did. I started as a teacher's aide and wound up teaching art and music at a school five minutes from my home, Aquinas Academy in Menomonee Falls, Wisconsin.

The school principal was a woman named Peggy Duemling. She was in her late 30s, a bright-eyed, lively sort, and I liked her right away; I think everyone did. During the several years I taught at Aquinas, I realized that she was one of the few people I've met who embody both wisdom and innocence in equal measure. She fully understood the ways of the world and the ways of human nature, but she retained her purity of spirit and never became jaded.

At that time, Aquinas only enrolled children from K3 through third grade. I loved the way Peggy taught the little children. Everyone in the school gathered in the great room each morning, and she led them in the simplest prayer, always full of her natural enthusiasm and verve. It began: "I love you, my Jesus..." The little children prayed along with her in loud, high voices. Peggy would tell them, quoting St. Augustine, "When you sing, you pray twice," and the little children would sing hard.

My conversation has been known to become a little salty. I may have dropped a raw word, once or twice, in the faculty lunchroom. One day I found a little scrap from Scripture left in my school mailbox: “Let no corrupting talk come out of your mouths, but only such as is good for building up, as fits the occasion, that it may give grace to those who hear.” (Eph. 4:29) I always wondered who gave me that subtle hint, and I have always suspected Peggy. That would be her gentle way.

She had a terrific sense of humor and a wry sense of irony that shone through every story she told...and she was a great story-teller. Many of her stories centered on Mother Teresa of Calcutta. Peggy had served in Mother Teresa's Order, the Missionaries of Charity. When Mother came to the States, which was often, Peggy was frequently her driver. She got to see Mother in many different places and with many different persons. People all over the world have kind of rosy ideas about Teresa as a modern-day saint, but Peggy knew her as a sassy and down-to-earth woman, in a four-and-a-half-foot frame, who could handle any situation.

One of my favorite stories that Peggy told was about Mother Teresa encountering a scowling nun in a hallway. I will try to relate it the best I remember....
"Sistah," Mother Teresa greeted her. Peggy imitated Teresa's voice, sort of low and growly with a heavy Albanian accent.

"How are you feeling today?"

"Well, tell your heart to inform your face."

After ten years of service all over the States, Peggy was not allowed to make her final vows with the Missionaries of Charity, because Peggy's bad asthma would not allow her to do the heavy work involved - like lifting AIDS patients.

After I left Aquinas Academy, I never saw Peggy again. I missed her and thought of her often, especially whenever I bought a new purse. Peggy had confessed to me her love of purses. She loved purses the way most women love shoes. And I always thought of her when I rode my stand-up paddle board, because she loved to paddle about in her little rubber raft.

In recent years I have had a few dealings with Aquinas Academy, but Peggy was gone. I didn't know how to reach her, and when someone finally gave me her email address, I was just too darn busy to follow through. The grandchildren had finally come, one after another, and I watched them often, kept a part-time job, and had begun writing books. Sometimes I think busy-ness is the sin of our age.

In 2014 I read that Peggy had made her final vows and started an order called Missionaries of the Word. She was no longer Peggy, but Mother Mary Catherine. She had two aspirants (pre-novices) and together they served young people in Baileys Harbor, Door County, Wisconsin.

I felt elated. Now I could contact her! Yet still I did not take the crucial step of making the effort to find her address or phone number.

My friend Donna Eddy used to say, “God’s middle name is Coincidence.” Finally, this summer I “happened to be” at a gas station in Markesan, Wisconsin, right after Mother Teresa had been canonized. There, right in front of me at the gas station check-out, was an Oshkosh, Wisconsin newspaper headline about a local nun who was slated to speak about St. Teresa of Calcutta.

It was Peggy! This time I did not delay. I called the newspaper reporter and told him I used to work with her and had wanted to reach her for years. I wasn’t sure he would divulge information, but he gave me her email address. I wrote – she joyfully responded - and on September 19, my husband, Mike, and I went to see her speak at Xavier High School in Appleton, Wisconsin.

Mother Mary Catherine’s speech was like the Peggy I knew sixteen years ago – full of humor, irony, simplicity, wisdom, and love. Several times, her words brought tears to Mike’s eyes and mine. I didn’t take notes, but I will share some highlights….

Mother Mary Catherine shared the essential message of St. Teresa of Calcutta: “Slow down, and LOVE.”

She told the story of how then-Mother Teresa visited the United States and talked to powerful politicians. She fearlessly proclaimed to them, “The United States is such a poor country… because her people are so hungry for love.”

She related funny stories, like when Mother Teresa caught her doing her peerless imitation. To say the least, my friend (then known as Sister John Fisher) was humiliated and worried. But she needn’t have feared.

“You do Mother better than Mother does Mother,” the tiny old woman proclaimed, with great humor.

Mother Mary Catherine told her favorite story of St. Teresa of Calcutta. It is about a man whose little girl gets a hamburger-and-ketchup mess all over her face and her good dress. The father picks up his little child and kisses her right on her ketchup-covered lips.

“That is how God loves us,” Mother Teresa explained. We mess up and mess up, and God can’t wait to give us a kiss.

My friend Peggy Duemling was a full-of-life woman who wanted to get married and have ten children. But she couldn’t ignore the call of the God who can’t wait to give her a kiss. Now she shares that amazing love with the young people of Door County. Aren’t they lucky!?

After her talk in Appleton, Mike and I stopped to say hi. She gave me such a tight hug. With my friend, you know you are loved. There is no holding back.

By the way, in her email, she told me that she did try a stand-up paddle board and she spilled right into the lake. She said the other sisters laughed and laughed. I haven’t asked her what she uses instead of a purse these days. I’m guessing she designed some large pockets into the beautiful blue habit she wears.

If you are interested, my friend Mother Mary Catherine writes a blog. 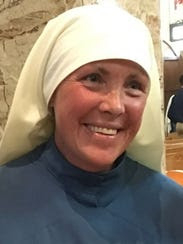 Gail Grenier is the author of Dessert First, Calling All Horses, Don't Worry Baby, and Dog Woman, all available from Amazon.com. (See links to the right.)
Posted by Gail Grenier at 2:14 PM