Mother to My Mother Figure 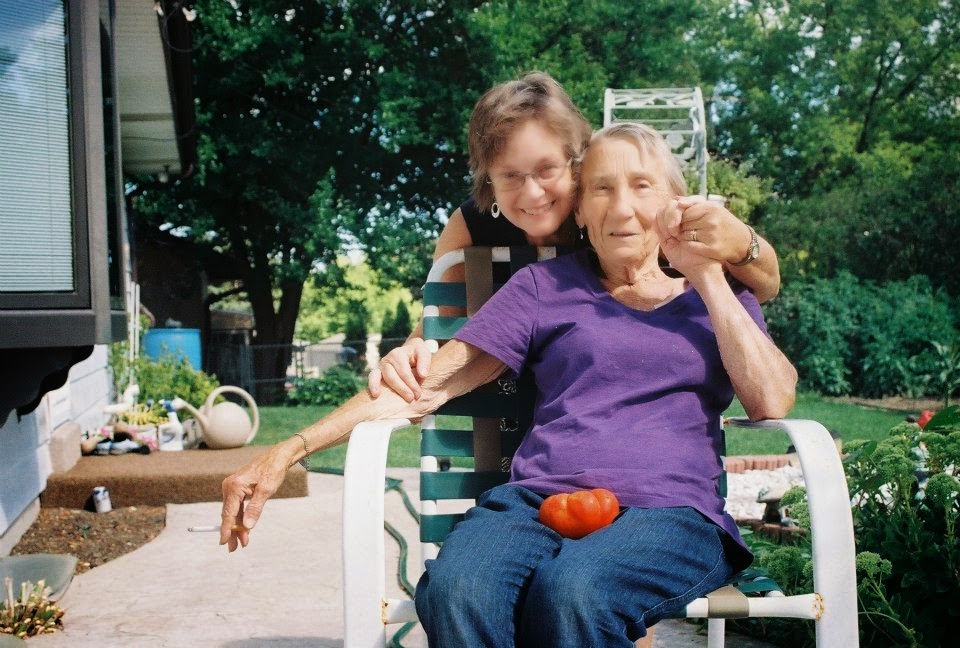 Nancy Reinsvold is my friend. Her doctor told her that she'd be dead in July…a year ago. That man didn’t know who he was dealing with.


She's almost 78 now, battling pancreatic cancer for nearly five years. I visit every week. We tell stories and laugh. Once she told me a news story about a man who drove through the window of a store, to rob it. The license plate fell off his car in the process. The police were waiting for the robber when he got home.


After she told that story, Nancy threw back her head and laughed. I could see all her teeth.


Another time, I gave her a photo I took of her – it showed her many wrinkles.


“You earned those wrinkles. They’re beautiful,” I said.


She would have none of it.


I love the picture. It shows her holding a cigarette and a giant tomato. She was so proud of growing that tomato that she invited me over when it ripened. I cut it into thick wedges, and we had a BLT feast.


She gets chemotherapy, and has nausea. She is sick of Ensure and oatmeal and yogurt and pudding. She’s down to 100 lbs. and wears size zero jeans – she loves her red pair with its manufactured rips, like the ones worn by movie stars.


Those red jeans fell off her recently. Her arms were full of NA beers her son had given her, when she realized the pants were around her ankles. There she stood in her undies and a shirt. She looked back at her son and said, "I'm mooning you."


Her work jeans have dirt-stained knees – from kneeling in her gardens. She toiled so many hours one day that she had to come in and rest. She looked at the clock and saw it was 8:00 a.m.


Sometimes we talk about grim stuff. She said, "I don't know what's gonna happen to our world. The killing and the taking God off our money and the hurricanes and the drought."  But Nancy and I don't often talk serious. We’d rather tease each other. I complain about her lame movie-star torn jeans and she complains about my lame clip-on sunglasses.


Just once, Nancy told me how her husband abandoned her when they had two young sons and she was pregnant with their third. She worked in a factory full-time, never had a car, asked others for rides. "I had to take my baby in a stroller through the snow to the babysitter at 4:00 a.m.," she said. "I don't know how I did it…. You do what you have to do."


She has a heart for single parents. In fact, that’s why I met her. We worked together on an outreach project I started, helping single mothers in our area. She was a hilarious volunteer, sorting donated clothing. If a funny old hat showed up in the donations, she’d wear it the whole time she worked. Always the clown. One day she took home some clothing to give to Erik, her garbage man – for his daughter, a single mom.


That’s the kind of person Nancy is. Her recipe for life is simple: Laugh. Laugh at yourself. Volunteer. Work hard. Get dirty. Give stuff away. Ask for help when you need it. Reach out to others (the garbage man too). And don’t give up.


I started bringing soup to Nancy when she began her cancer fight. At first, I paid visits in gratitude for her work on the outreach project. But over the years of visiting, something changed: my appreciation turned into love. I don't know how my emotion changed, or where it changed. It just did.


Nowadays, Nancy and I say "I love you." She calls me "Sweetheart." I call her "Sweetie pie." She gives me smooches right on the lips and I hug her skinny bones.


My mother died in 1978. I raised my children without her support and love. That was hard. I wondered for more than three decades if I’d ever find someone like Mum, funny and strong. Gradually I started to imagine Nancy as a kind of mother.


That's what I thought, anyway…. I didn’t realize what was going on in Nancy’s mind.


Her own mother died when Nancy was an infant. In her nearly eight decades, she never knew a mother's love. She raised her sons without the support of a partner or a mom.


Last month, Nancy told me something that shocked me. Her wrinkly face burst into more wrinkles when she smiled and said, "I tell my son that you're my mother."


She started calling me Mother Dear.


But I fooled her. I call her Mother Dear too.
***
[This is a piece I adapted from a section of my book, Dessert First. I read the piece last week at an audition for Listen To Your Mother Milwaukee. About 50 of us read for 10 cast slots. I didn't make it, but got a super-nice rejection letter. Heh.
The fun of revising the original piece was that in the process, I mentally spent hours "with" Nancy, who died in the summer of 2014.
As a writer, it was humbling for me to realize once again that you can always re-edit something you've written. In other words, a writer is never really "done." I know it's true, although I hate that perfectionist idea. I wrote for newspapers and magazines for decades; when you have a deadline, you just git 'er done. That helped me fight perfectionism.

Leonardo da Vinci said, "Art is never finished, only abandoned." I think he was right.]