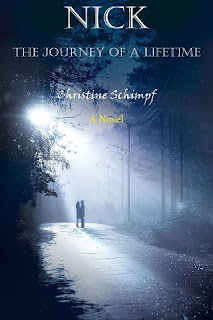 I’d like to share an interview with Christine Schimpf, my writing student and friend, who recently published her book Nick, the Journey of a Lifetime. It’s no secret to any reader of my blog that I love all things ethnic. How could I not love a story like Nick’s?

Gail: Tell me about your book, Chris.


Chris: What I have heard the most about my book, from those who have read it, was “It was hard to put down.” The story begins with an aerial view of the village of Calma, Yugoslavia, formerly the Austrian-Hungary Empire. The reader enters the world of a small ethnic group of people known as Donauschwabens. Soon the reader is walking in the shoes of the Nicholas Russ. He’s a young man working a carpentry apprenticeship. The coins in his pocket are jingling as he walks down the cobblestone walk, making his way to local Gausthaus to meet up with his favorite girl Theresa.


Gail: Interesting background. How does the story take off?


Chris: Well, the reader soon discovers that Nick has a bit of a problem. He finds out that his sweetheart, Theresa, has been promised to a butcher in the next village. Now, this is not that unusual given the time period. Parents often arranged marriages for their offspring to benefit not only their child, but themselves as well. In this case, an alliance with a butcher would be welcoming, as meat was a scarce commodity. Unfortunately, this arrangement is not what Nick had in mind, so he does what any man in love would do.

Gail: I bet you’re not going to tell us that part, right?
Chris: (Laughter) That’s right. At first, I thought the book would center on this unique and wonderful way a marriage began. However, as the events of Nick’s life unfold, the reader experiences firsthand the life of an ethnic German living in Europe during and after World War II. The story reveals the hardships, challenges, and opportunities that Nick had to deal with it and the consequences that followed his decisions.


Gail: Are there many books written about the experience of the Donauschwaben people?


Chris: Most books that I have found are in memoir format. My book is unique because it is based on true events but written as fiction through the eyes of Nick. As Americans, we haven’t had the experiences of ethnic cleansing, displacement, living in refugee camps and considering leaving our homeland. Nick and his family did. Call it luck or call it fate, but things turn around in their lives and by the Grace of God they become very successful entrepreneurs.


Gail: Christine, who is the audience for your book?


Chris: Since the book is void of sex, violence, and foul language, it is most appropriate for sixth grade to adult. My intention, Gail, was to inspire and encourage the reading audience to begin asking questions about their own rich histories and traditions. The book could easily supplement history, social studies, reading and English classes and is also a good choice for book clubs.


Chris: True, the book is sprinkled with some pretty tough experiences as well as the some pretty beautiful ones as well. For example, the reader is present for weddings, births, and family celebrations. It spans Nick’s entire life. We learn of the beautiful traditions the family held dear and we feel the torment Nick feels with the tough decisions that had to be made. The Epilogue pulls everything forward to present day.


Gail: What’s next for you, Christine, any writing projects?


Chris: As a matter of fact, yes! I’m polishing my next work entitled, “THE TICKET, A LOVE AFFAIR WITH TITANIC.” It’s considered historical romance and set in Belfast, Ireland, during the construction of the Titanic. A young woman is torn between her attraction for adventure and her desire for love.


Gail: Sounds like an interesting tale. When do you plan to release it?


Gail: Good luck to you, Christine.


Chris: I appreciate the opportunity to share my work, Gail. Thank you.
Posted by Gail Grenier at 9:07 PM

Email ThisBlogThis!Share to TwitterShare to FacebookShare to Pinterest
Labels: Christine Schimpf, Donauschwabens, ethnic cleansing, immigrant's journey to the USA, Nick, the Journey of a Lifetime