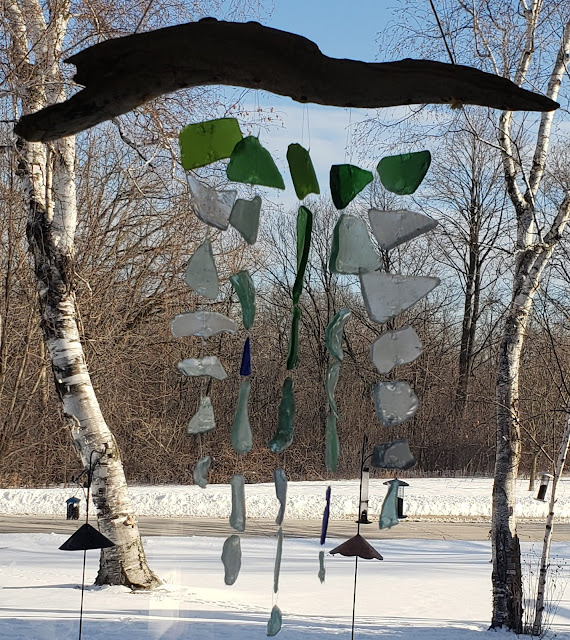 Sometimes, when life throws you trash, you can turn it into treasure.

In 2015, my husband and I moved to the south side of the City of Milwaukee, across from Kinnickinnic River Parkway. I was a transplanted north sider with no clue to the name of that green space; I was content to see it was full of trees. Shortly after moving in, I was pleasantly shocked to discover a river rippled, hidden within, edged by footpaths that I swear must have been started hundreds of years ago by Native American men, women and children.

The Kinnickinnic River, once grand in these parts, was named by those native peoples. It's been diverted so many times downriver that it's a quiet stream in my neighborhood. Some folks call it a creek.

The Kinnickinnic ("KK") River gurgles along in the woods across from my house.

Because it's only a stream, sections of riverbed sand and pebbles are exposed. That riverbed has become a playground for my grandchildren and me. It’s our place for skipping stones, creating cairns, making rock bridges, mining clay for pots, and dubbing one area “Worm City.” We’ve done our own informal cartography, naming different areas after the ones discovering them.

My grandson Liam built these cairns in the KK riverbed.

While we play, we gather litter. For five years, we collected broken pieces of glass among candy wrappers, aluminum cans, and plastic bags. We tossed it all, plink and plunk, into the litter pail. Strangely, we never cut ourselves as we scooped up the glass pieces. I stopped warning the children against grabbing it after I realized that even the youngest one managed the task without being nicked.

That should have been my clue. It was sea glass, or better described, river glass. The glass shards didn’t slice us because they’d been ground down for years by water action. It took me five years to realize the glass was smooth, and more, that it was beautiful.

We stopped throwing it away.

Starting last fall, we began collecting it. For all of us, the hobby was a fun diversion as Covid-19 months dragged on. We found there was always new glass to gather after a storm, because the water dragged more to us. I searched as often as I could; the hunt fascinated me. For my daughter Anna and her son Max, who live across the street, picking glass became their thing to do outside the house. Many days during fall and early winter I’d find a gift on my front porch: a bag full of river glass Anna and Max had picked on their walk that day.

Our scavenging has become the oddest treasure hunt – for garbage instead of gold. Our most common finds are clear glass, then brown (beer bottles) and green (beer and soda bottles). Rare colors are light blue, light green, cobalt blue, and finally red, the rarest. The children and I have our own favorite colors as well as favorite types of glass – thick or thin, textured or smooth, curved or flat, stamped with writing or embossed with letters, numbers, and patterns.

I read up on sea glass and learned a lot. The glass becomes cloudy and almost gemlike from decades of pounding by sand, water, pebbles and water debris.  I bought a little rock tumbler to finish the process for the pieces that hadn’t “clouded up” sufficiently to achieve that mysterious gemlike appearance.

It didn’t take long before I figured we could make something from the glass. You Tube provided directions on creating a suncatcher or a set of wind chimes, which interested me most.

It took me two months to finish my wind chimes, mostly due to my own avoidance. The You Tube lady did her demonstration in a fast-action video of about a half-hour of work (Youtubers have magic powers).

When I told a friend about my new hobby, she waxed poetic about “receiving an unexpected gift from the waters.” I could wax poetic too, but I’ll tell you the truth – this is just fun. My favorite part is the gathering. Besides scouring various sites along the river, I’ve picked glass on the shores of Lake Michigan, our beautiful inland sweet-water sea.

I took my neighbor Judy to Lake Michigan to try it out. At first, she couldn’t see the glass.

“Look for something that resembles ice cubes,” I told her. “When the sun hits, they sparkle.”

Finally, Judy began to see. We searched, stooped, and scooped, over and over. We encountered another sea glass lover who had attached a sieve to a stick so she could grab without stooping. She laughed at the buckets we carried. “You won’t find that much glass,” she said. We told her we picked up litter too.

It was during my hunt with Judy that I realized I felt still while I searched, stooped and scooped. I thought about nothing and I felt calm. Very Zen! I had an active meditation practice for five years during my thirties, when I struggled to chill my monkey mind. That day, I chilled it without trying. And so it's been for me ever since.

One day shortly after introducing Judy to the hunt, I found a bag left on my front porch. It didn't look like one of Anna's and Max's contributions. I opened it: river glass. Judy later told me that her partner Mike had left it for me after gathering it. The fascination spreads!

I took an eight-year-old friend named Kaylee searching in the riverbed. She quickly became frustrated. “I can’t see it!” she complained.

“Keep looking,” I told her. It took about eight minutes before she out-Sherlocked me.

My journey toward sea glass awareness reminds me of a story uncovered by a journalist friend of mine, Sharon Roznik. She wrote about the prehistoric petroglyphs discovered by a man on the farm he had worked for 50 years. There they were, beautiful Native American markings on big stones he had passed for decades. Sometimes a treasure is right under our feet. We just have to open our eyes.

Here is a photo diary of our process, plus accidental finds along the way, including the creation of crafts by my niece, my grandsons and their parents, and me. . . .

Besides the Kinnickinnic River, we love to pick glass along Lake Michigan's shore at Milwaukee's Grant Park. This beach is at the end of the Seven Bridges Trail there. 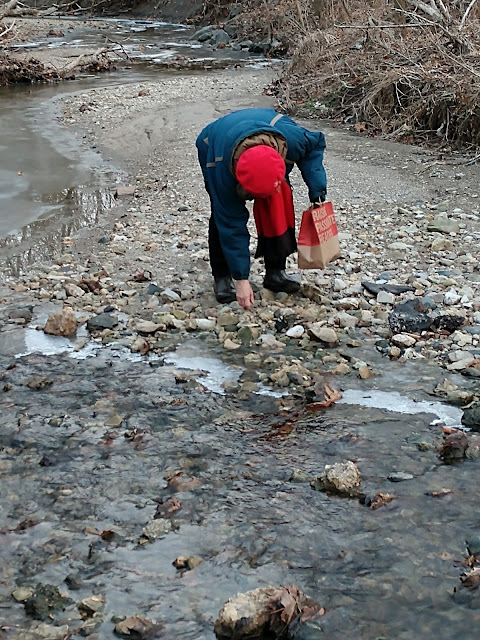 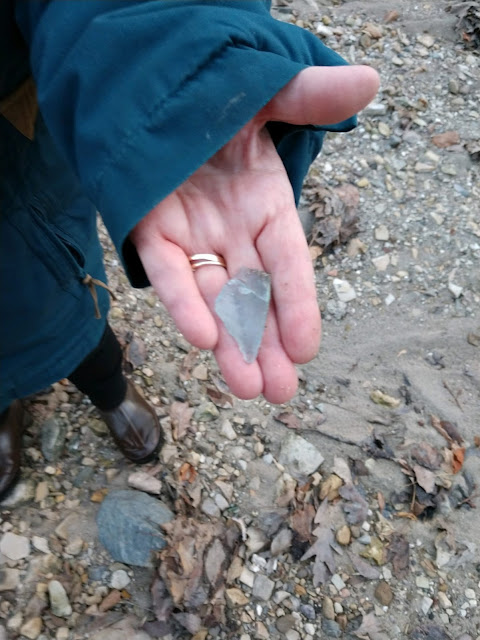 An even more rare find: a big chunk of cobalt blue.
Makes the old lady smile. 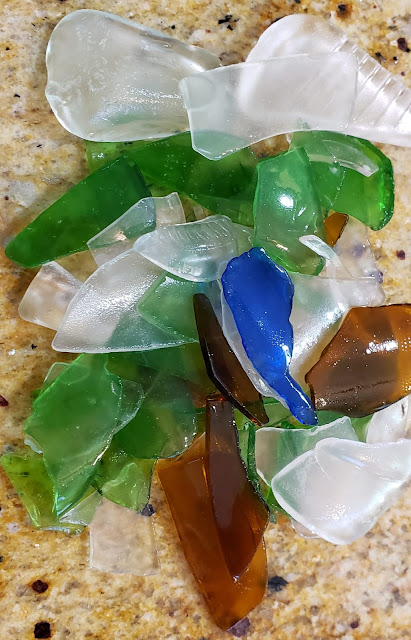 A nice batch of glass cleaned up after tumbling. 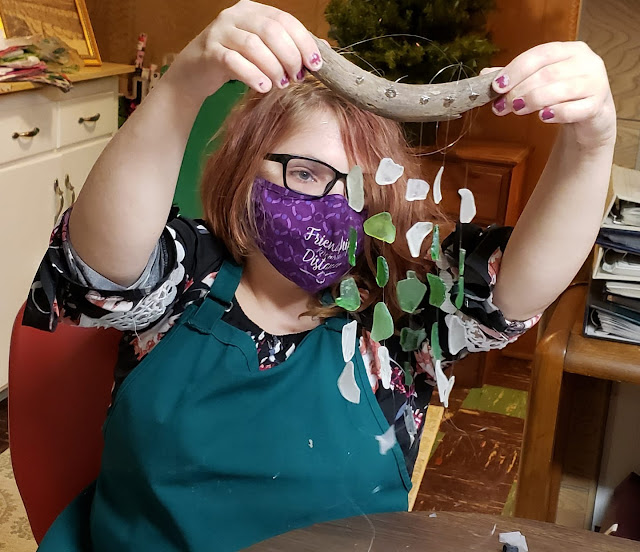 My niece Ashley with the suncatcher/wind chimes she made for her sister-in-law. 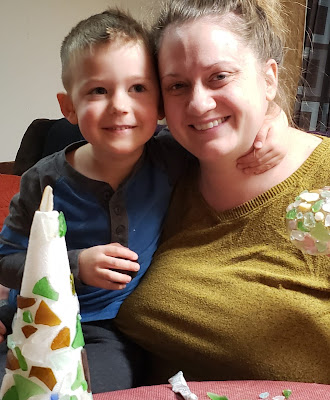 Daughter Anna and grandson Max the day they
worked on a Christmas tree and ornament.

Sons Charlie and Brian with grandsons David, Isaac, Liam and Oliver plus ornaments.

A grandson's ornament in the Christmas tree 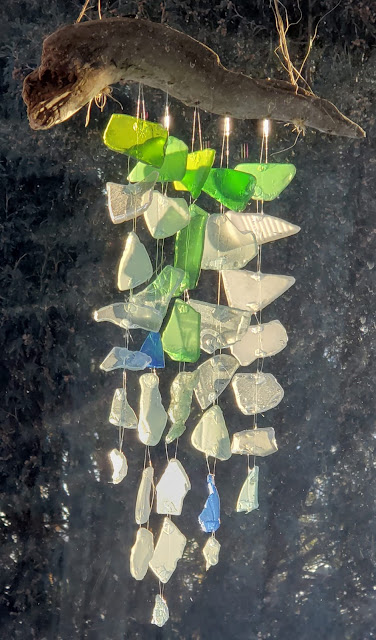 It was excruciating work for me, but I finally finished my suncatcher/wind chimes. I love when the sun shines through, especially on the cobalt blue pieces. 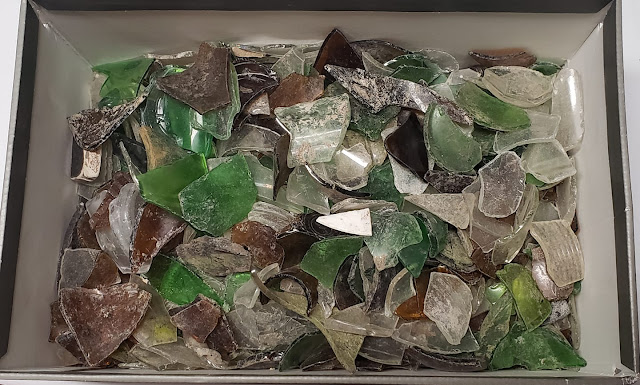 My store of sea glass waiting to be cleaned up. Who knows what it will become?
***
Gail Grenier is the author of Dog Woman, Don't Worry Baby, Dessert First, Calling All Horses, and Young Voices from Wild Milwaukee, all available on Amazon.com.
Posted by Gail Grenier at 5:55 PM