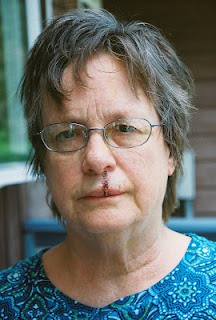 
First order was a chest x-ray to make sure the cancer hadn't spread to my lungs. The mouth and lungs are linked, my doc explained, and any problem is exacerbated by smoking. Those of us who were there know that no one who lived through the 50s, 60s and 70s emerged with lungs unscathed by smoke. I'll admit that it was a LONG six-day wait until I got the x-ray results: negative.

Now, on to the lip. Surgery was the next order. And as my dermatologist so frankly put it, “After surgery, the defect is sometimes larger than what we’d expect.”


I think I have a low-to-normal amount of vanity for an American woman, tempered by humility lessons from my upbringing. I'll admit that the thought of having a big honking scar ON MY LIP gave me pause. My husband joked, “Just wear a burka.” My sister-in-law Nan suggested that I grow a mustache. Equally-funny ideas sprang from other loving friends and family members. I’m laughing, I’m laughing.


This morning, I visited the surgeon who will do Mohs surgery on my lip on May 14. Mohs is a special kind of surgery that takes hours but results in the least amount of tissue being cut. The day after the Mohs surgery, my surgical wound will be closed by a plastic surgeon.


After I met the Mohs doctor, I spoke with the plastic surgeon. He explained that the human lip heals well and is somewhat forgiving of bits taken out of it. However, he said we must be prepared for the worst. That means, in short, that if too much meat is taken from my lip during the Mohs surgery, I’ll need some filler. In that case, he’ll do a lip switch.


“It's true plastic surgery,” he explained, somewhat proudly, it seemed to me. If it’s necessary for him to do a lip switch, he’ll cut a wedge from my lower lip and attach it to my upper lip. However, he’ll leave that wedge attached to the lower lip so its normal blood flow will “feed” the transplanted piece as it becomes one with the upper lip. This process will last two weeks, during which my lips will stay closed and I’ll get my nutrition from a straw.


“You would lose weight,” he concurred, a little too readily, I thought.


The doc added that after two weeks of shut-mouth, he’ll snip the flap and I’ll be able to use my mouth again.


Now, chances are (please dear God) I won’t need the lip switch. However, while l’m grateful for early detection (especially after seeing pictures of advanced squamous cell cancer, holy cow), and while I’m happy to have insurance that’ll pay for most of the surgery, may I just say –   EW???!!!


Lucky for me, the surgery is scheduled at the start of a month break in my teaching schedule. It'd be hard to teach with a big fat upper lip, and impossible if I couldn’t open my mouth. At home, I’ll have to learn to nag by note-writing.


Afterward, I’m guessing there will be some cicatrice. (Overwrought sigh.) If so, the world will have to look into my eyes to seek the soul within…. (The curtain falls, dramatically.) 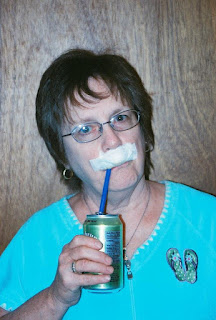 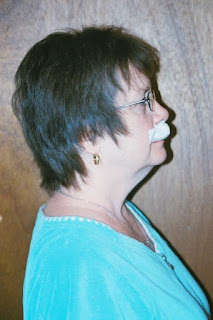 
Gail Grenier is the author of Calling All Horses, Dog Woman, Don't Worry Baby, and Dessert First, all available on Amazon.com.
Posted by Gail Grenier at 2:32 PM