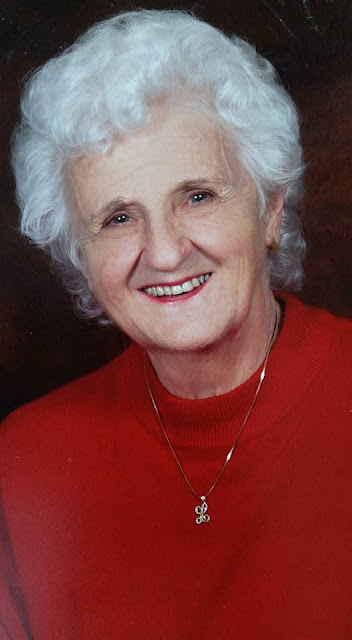 I am Michael Sweet and I am here to honor my mother, Lenora.


In preparing this eulogy, I struggled with how to condense a ninety-year life into a short twenty minutes. Just kidding Father Charlie.


Lenora was born in South Dakota in 1926 to Ellis Island immigrants from the Transylvania mountains in Romania. Although she was born in the United States, her home life was culturally foreign. She never lost the feeling of being a foreigner.


Mary Jane? I guess that name marks the transition of the family into American life.


So, before Livie was born, Lenora was surrounded by her four brothers, which must have fostered a spirit of toughness.


Lenora grew up in the small town of Aberdeen, South Dakota, in the West Hill part of town, which was the poor side of town at that time. Her father worked for the railroad in the ice house, seven days a week, from 7:00 p.m. to 7:00 a.m. He slept during the daytime, and the children had to be quiet. My mother grew up dreading the word “Shhh.”


Her parents spoke the Romanian language to each other in the home, but our grandmother, Seana Stoia, began to learn to speak the English language when her first-born son began going to school. So, Lenora did learn to speak English at around age three.


In 1944, my mother graduated from high school and hoped to go to a secretarial business school in the big city of Sioux Falls, South Dakota. However, her plans for further education were dashed – a huge disappointment for her. Her parents thought that a girl should work first and then marry and raise a family. Plus, there was no money to waste on educating a girl.


This explains Mom’s insistence that all of her five children get college degrees – even the girl, Marilyn.


Throughout her life, Mom was very inquisitive. She always wanted to learn about everything, and after Dad died, she kept very busy as she attended one educational seminar after another.


In 1944, with no hopes for a higher education, Lenora went to work in the office of the Northern Wholesale Company in Aberdeen. In 1945, she visited a girlfriend in Milwaukee and she was introduced to Jerry Sweet by mutual friends.


Mom told me that for one of their first dates she asked Jerry to take her to a burlesque theater; there was nothing like that in Aberdeen. She laughed when remembering that Jerry probably thought that she was a wild girl, but she figured that she’d never see him again so she didn’t care.


In 1946, she moved to Milwaukee and found an office job at the Badger Paint Company.


Years after my father died, I asked Mom why she continued to see Jerry. She replied that Dad was fun.


She loved to travel. Our family made annual summer trips to Aberdeen to visit Grandma and Grandpa. The annual pilgrimage to Aberdeen fostered our family soul.


After my dad’s retirement in 1984, they traveled the world together for twelve years – Spain, Poland, Hawaii seven times, are just a few of the trips that come to mind.


Her mother raised her children in the Roman Catholic faith, because there was no Eastern Orthodox church in Aberdeen.


In 1948, Jerry Sweet converted to the Catholic faith, and he and Lenora were married at St Rose of Lima Catholic Church in Milwaukee. In 1954, they purchased a home on Wick Place in Milwaukee where they raised their five children - Michael, Douglas, Robert, Steven and Marilyn. Our lives centered around St Rita Parish. Dad belonged to the Holy Name Society and was a cub scoutmaster. Mom belonged to the Christian Mothers and was a brownie leader. All of us kids went to St Rita grade school and participated in boy scouts, girl scouts, baseball and basketball. Weekly Sunday Mass was the rule of the house.


When Mom and Dad were courting, they loved to go to Scheileins on Bluemound Road every Friday night for a fish fry. At that time, Catholics were not permitted to eat meat on Fridays. Mom and Dad liked the fish, and they loved the potato salad. After months of Fridays, Mom realized why she loved the German potato salad – it was loaded with bacon! She felt terrible to learn that she was unknowingly eating meat on Friday.


In the 1960s, after the second Vatican Council, the Church changed the rules to allow eating meat on Fridays. Mom was furious. She had grown up eating meatless dishes on Fridays, like the Romanian dishes mamaliga or plachinta or clatita. She didn’t understand how rules that were ingrained from childhood could be changed. But she never lost her faith.


For the twenty years after Jerry passed away, Mom rarely stayed home during the day. For the first ten years, she continued to work her part-time job for Milwaukee Public Schools. She also continued to be a poll worker at the Fairview voting center.


As dementia was starting, and that polling job became too difficult, they allowed her to work there as a greeter.


She continued to meet with friends to attend lectures to further her education interests.


Finally, in January 2012, she entered an Alzheimer’s facility where she endured for five years.


She wouldn’t give up. She was a tough old Romanian.