Bored in the USA?


I just finished a book called I Am Malala. It was written by Malala Yousafzai, a devout Muslim girl who was recently awarded the Nobel Peace Prize. When she was a young teenager, she lived in Pakistan and became a public defender of education for girls. The Taliban didn't like that. They shot her in the head, but she survived. She suffered some permanent injuries from which she'll probably never recover, but she continues to work for education for all young people from her new home in England.

Malala's account made me realize that universal education of young people is precious and rare. With her struggle and suffering still fresh in my mind, I encountered Josh Tillman's song "Bored in the USA," posted on Facebook by a young friend of mine.


Josh Tillman, an indie singer/songwriter who gave himself the name "Father John Misty," is promoting his new album called "I Love You, Honeybear." The album cover features a satire of Madonna and Child art that I find both frightening and mean-spirited: 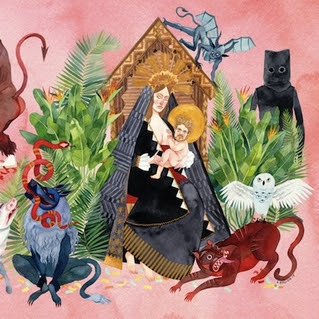 I could write about how much I despise Tillman's snide moniker and irreverent album art, but I'm here today to write about one thing: his song, "Bored in the USA," which is getting air time on indie radio stations and which Tillman performed live on David Letterman last week.

The song is a paean to smugness. Here's a sampling of the lyrics:

They gave me a useless education/A subprime loan/A craftsman home/Keep my prescriptions filled/Now I can't get off, but I can deal.

...my brain's so awfully glad to be here for another mindless day.

Save me white Jesus/Bored in the USA.

Save me President Jesus.

Josh Tillman, if I were your mother and you said you were bored, that's like asking for a chore to do. Grab a broom.

Bored! Really? Life is so full of amazing things. If you're bored, it's your own fault.

Tillman's lyrics remind me of Paul Simon's start to the song "Kodachrome:" When I think back on all the crap I learned in high school, it's a wonder I can think at all.

Simon's lyrics always bugged me too.

I went through the most rote of educations, in classes of 50 or 60 students, during the 1950s, and yes, religion was "shoved down my throat" just as it was for poor suffering Josh Tillman. I went to Catholic elementary school, so our history and geography lessons always included stories of Catholic explorers and missionaries. We went to Mass every day.

I went to public high school, where I had smaller class sizes, but our school fit the norm of the day: you took the classes you were told to take, you studied in study hall, and there was no such thing as a flexible schedule.

In spite of having an often rote, usually limited education from kindergarten through grade twelve, I learned a lot. And somehow, I became a creative, classically liberal-minded person who always looks at both sides before making a decision.

Here are some things I learned while I wasn't being bored in the USA:

(1) I learned to read. That means I'll never be bored.

(2) I learned to add, subtract, multiply, and divide, all of which I can do fast. I use these operations often. I never understood algebra, but I appreciated the elegance of geometry and the patience of my dear teacher Mrs. Loretta Tabbert, who was so kind and accommodating to my slowness.

(3) I learned that the world has many countries and beautiful terrains, and that water is everywhere. I was amazed (and continue to be amazed) by the countless nationalities of people, their skin colors, clothing, housing, way of life, music and languages.

(4) I learned how energy flows in a plant and in a tree and in my own body. I began a lifelong fascination with nature and science.

(5) I learned to write...providing limitless joy in my life...and to type.

(6) I learned that I could do things if I'd only try, even hard things in gym class, even if I felt clumsy.

(7) I learned about people - mean ones, sweet ones, those who ruled the school and those who never fit in.

(9) I learned to speak French - poorly - but came to believe with G.K. Chesterton that "anything worth doing is worth doing poorly."

(10) I learned about American problems and about what we used to call "civics." I learned the history of our country and our world.

Back to #7 above. Josh Tillman, I learned about people like you in school. For some reason, people like you think you know it all, and your smugness knows no bounds. You like to laugh at the rest of us who are trying to do the best we can in our marriages, in our relationship with God, and in making a living in spite of a government that can get in the way. You find it easy to poke fun at organized religion, surely the easiest of targets. And you have no respect for Jesus.

Yup, marriage can be hard, the most faithful believer can have doubts, and we can all get frustrated with our government and our economy and our country's part in the world's seemingly endless wars. We who love nature bemoan its degradation.

Yet everywhere I look, I see people who are trying to make things better: people who still believe in the best about humankind.

I believe in those people.

I've never understood why anyone makes fun of another's religion.

I just don't see what good comes out of a song like "Bored in the USA." Laughter is good, yes, but dang it's such bitter, spiteful laughter.

I'll say this, Josh Tillman: you have a beautiful voice. There are many ways you could use it. You could be like young Malala Yousafzai, who continues to risk her life to work for good in the world.

Gail Grenier is the author of Calling All Horses, Dog Woman, Don't Worry Baby, and Dessert First, all available on Amazon.com.

Email ThisBlogThis!Share to TwitterShare to FacebookShare to Pinterest
Labels: American education, Bored in the USA, Father John Misty, I Am Malala, I Love You Honeybear, Josh Tillman, Malala Yousafzai