Farewell to Wick Place – A Story of Family and Healing 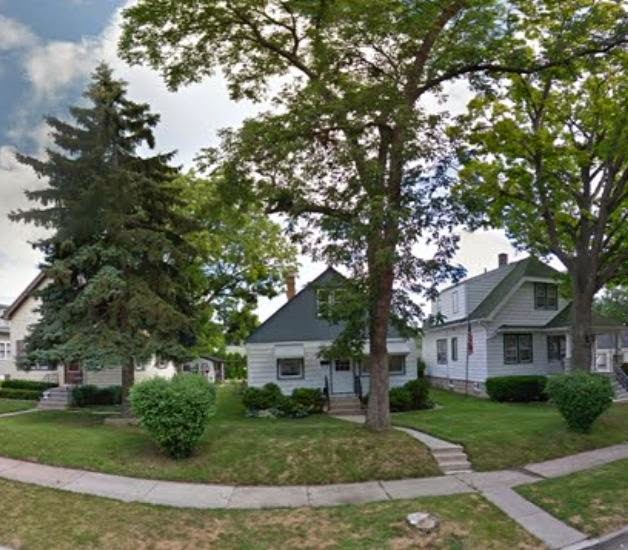 A house holds the soul of the family who lives there…or so it feels to some of us. And thus it has seemed at 6710 W. Wick place, a white and blue Cape Cod house on a tiny city lot near 67th and Lincoln Streets in Milwaukee. This is the place called “home” to my husband’s family since 1953.


When Jerry and Lenora Sweet moved in, they had two sons, Mike and Doug. Jerry had completed his Korean conflict duty in the Air Force. He and Lenora had building to do. Over the next years, they “built out” their family with three more children, and Jerry “built out” the house to accommodate their clan of seven.

Jerry finished the attic so it became a dormitory for his four sons – Mike, Doug, Bob, and Steve. He created built-in drawers that slid into the space where the roof slanted, so the boys never needed dressers. Jerry and Lenora’s fifth child was a girl, Marilyn, glory be, and she got the second bedroom downstairs to herself.

The building-out extended from top to bottom. Jerry installed a toilet in the basement laundry room, behind a privacy wall that he erected next to the set tub. He put up stud walls to create three distinct rooms: one for laundry, one for a workshop, and one for fun: the proverbial “rec room.”

For that recreation area, Jerry outdid himself. He hammered up thick knotty pine tongue-and-groove boards on the walls, installed a dropped ceiling with acoustic tiles, and slapped down a tile floor in the pattern of a brown and white checkerboard. He created a knotty-pine bar on one end, complete with a little door to keep out little kids.

The final build-out was a family room off the kitchen. And that was that. Jerry and Lenora raised five kids in what young marrieds today would call a “starter home” of about 1,200 square feet.

In time, Mike, Doug, Bob, Steve, and Marilyn moved out and established their own lives. I married Mike. Doug remained a bachelor (and became the beloved Uncle Doug); the four other Sweet kids brought in-laws and grandchildren to the family. Every Christmas Eve, all of us gathered in the rec room, where Jerry dressed like Santa and everyone, young and old, sat on his knee.

The Sweets were not to remain clustered around Milwaukee as they had been for decades. A month before Jerry and Lenora’s 48th wedding anniversary, Jerry died. It was a sorrowful time for all of us…and also the end of our gatherings at the house. We suspect that without Jerry, Lenora never had the confidence to throw another big party. At different points, Bob and Steve relocated out of state with their families. Only “Uncle Doug” and Lenora remained in town, along with Mike and Marilyn and their families. From 1996 through 2011, Lenora lived alone at Wick Place, always researching and visiting senior apartments, but never willing to leave. 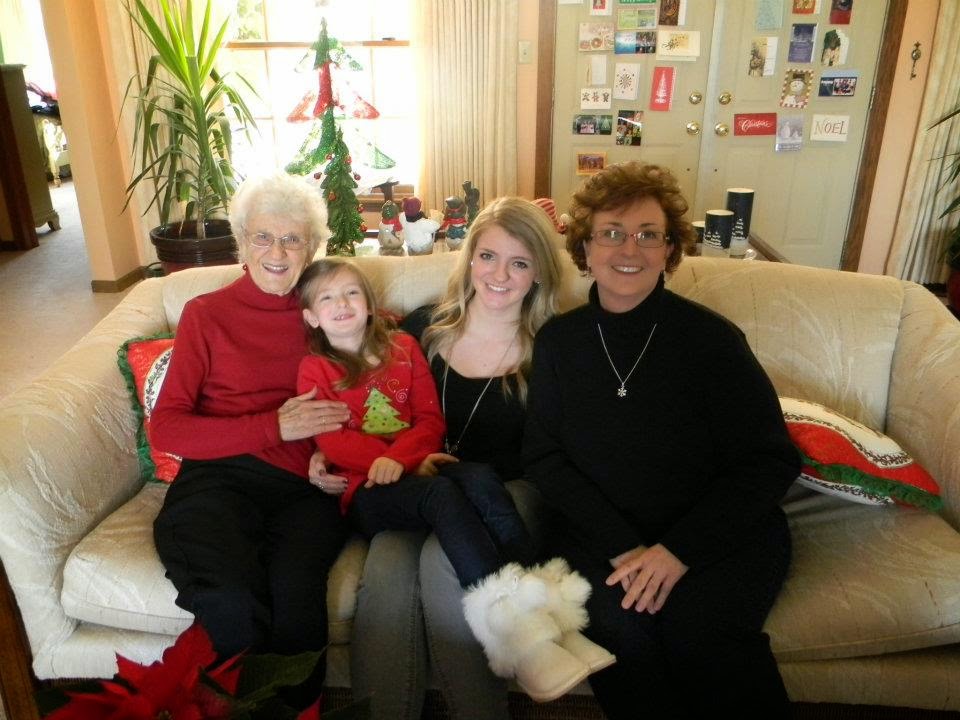 Lenora with granddaughters Tessa and Sarah, and daughter Marilyn, Christmas 2012,
in Lenora’s sister Mary Jane’s home in Illinois, where Lenora lived for three months right before she had the stroke

The Milwaukee-area Sweets gradually grew alarmed as Lenora struggled more and more with forgetfulness. Eventually it became obvious that her condition was dire. Her doctor diagnosed her with Alzheimer’s disease. She experienced a mini-stroke, and shortly afterward, Marilyn and Mike were able to move her to a home specializing in the care of people who have dementia. We visit as often as we can, even though she shows no signs of recognizing us. Sometimes I sing to her and she keeps the beat with her foot; there's still "someone home."

So it is that after sixty years, Lenora no longer lives at 6710 W. Wick Place. The home has been an empty shell since the start of 2012. During that year, Marilyn worked to clean it out. I helped, as did Debbie (Bob’s wife) when she visited from Texas. We reminisced and laughed as we boxed up clothing and put pieces aside for Lenora’s grandchildren. But Marilyn’s health was failing; she was fighting cancer and battling the side effects of chemotherapy. The packing-up of house contents skidded to a stop during 2013.

In September of 2013, Marilyn died. I have seldom been to a sadder funeral. She fought so hard for almost five years to stay here; she wanted to raise her daughters. Her two sons were already out of the nest, but her girls were only seventeen and eight years old when their mother died. Although Lenora knew well that Marilyn had been struggling with cancer, she was too far gone into Alzheimer’s Land to understand her daughter’s death. So we never told her.

After Christmas of 2013, I set myself onto clearing out Wick Place. With the help of a handyman, it took me about three months. Dennis (the handyman) lifted all the carpets, to reveal sixty-year-old oak floors in beautiful condition. I packed, he painted, I washed, he scrubbed, I pulled out nails, he patched. Car loads and truck loads of clothing and housewares went to Goodwill. Fifteen boxes of knick-knacks and housewares went to a charity rummage. Bins and bins of paper went to recycling. Furniture the kids and grandkids hadn’t taken went to others who needed it. Unwanted tools went to our group campground up north. During those ninety days of bitter cold, snow, and icy sidewalks, it was difficult to haul all the stuff out of the house and down the slick outdoor steps. But Dennis and I walked like penguins and never fell (whew).

By Easter, the horrible weather abated and the place was transformed. The house was empty and it glowed – ready for someone new to move right in and call home.

During the clearing-out process, I remembered a lot. As I packed and cleaned, I pictured family parties in the house. I could see Jerry’s eyes twinkling as he teased me. I recalled more than one time when I reached for a second dessert, and he’d say, “Have another one, Gail.” He got me every time. When someone teases you with love, it doesn’t hurt.

I didn’t have the same relationship with Lenora. It wasn’t that we didn’t get along, more that we were two trains on different tracks. I never felt that I was “blood” to her. I think because of this, I began the house-clearing with a feeling of resentment. Miraculously, and unbidden by me, as the three months passed, my resentment evaporated.

While I packed, lifted, and carried, memories flowed back. Some of them were unpleasant recollections brimming with the general disconnection I always felt with my mother-in-law. But to my delighted surprise, many memories arose that were good, and funny. I recognized that I did have a lot of fun with Mike and his family at 6710 Wick Place.

I came to realize that in the past when I pushed down unpleasant memories, I had pushed down all memories. I'd been so determined to seal away any hurt and negativity that I shoved down the good stuff too. As I packed and mopped and wiped, all the memories arose, freely, from their locked storage unit in my body. I was able to let go of the negative ones and relish the positive ones.

By Eastertime, it wasn't only the house that had been transformed; I too had changed. I had fallen in love with Wick Place. I took a nap there one day because I was too exhausted from packing to drive straight home…and as I rested, all cozy, I felt like the place was my home. There’s something about working on a house that makes it yours. I came to realize that 6710 W. Wick Place holds part of my soul too. I came to acknowledge that part of my soul is part of the Sweet family soul. And I’m glad of it.

I called a “Farewell to Wick Place” party on April 6. All the local Sweets came to celebrate, along with Lenora’s brother and sister from Illinois. Suddenly the house that was shined up and empty was filled with people from age one through age seventy-eight. The party lasted a few hours and included pizza from the venerable Happy Tap nearby (best pizza I’ve ever tasted; and I don’t even like pizza!), a fabulous salad made by my daughter-in-law Rae, and cookies to die for baked by my daughter-in-law Katie. 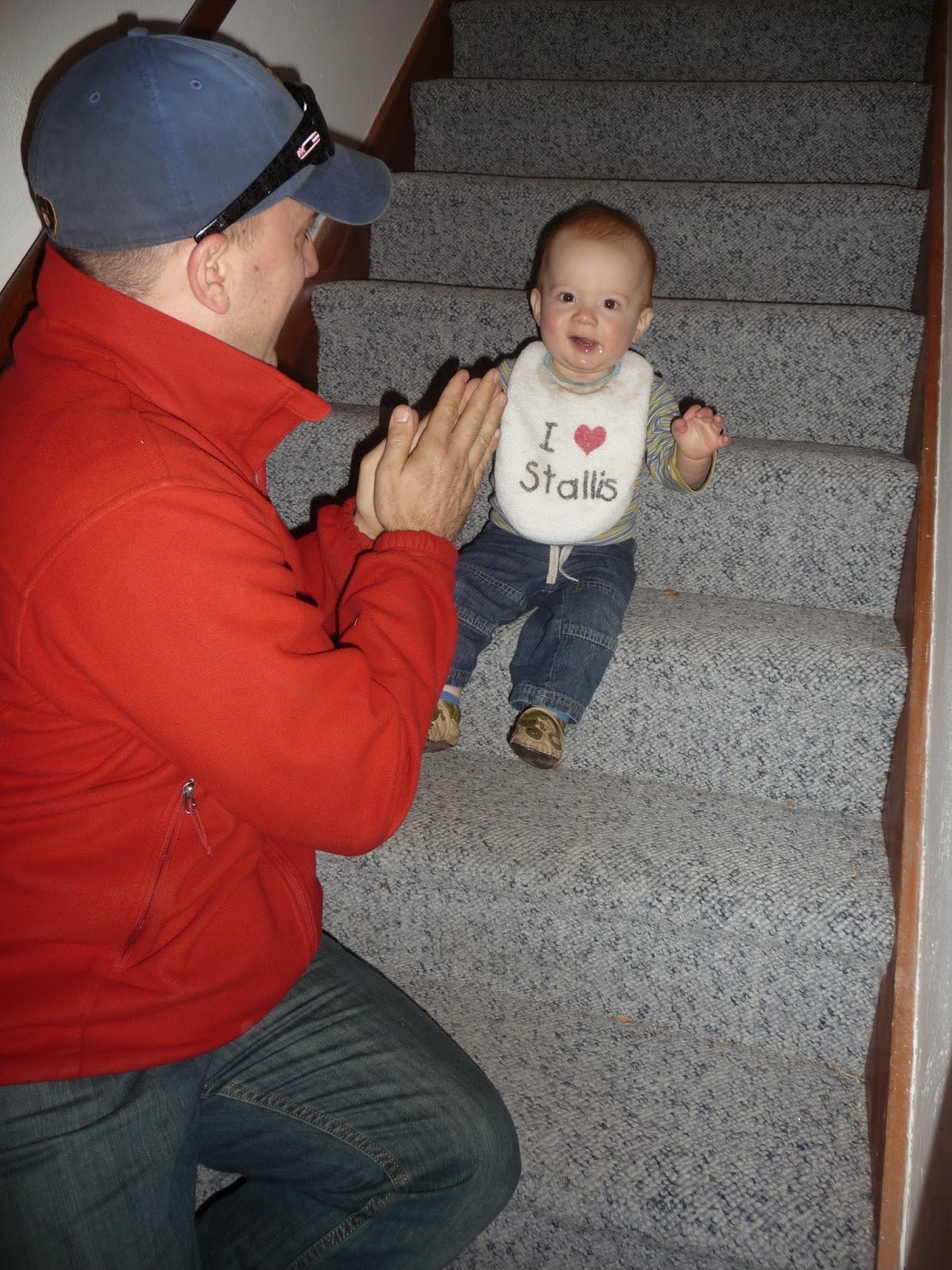 My son, Brian, with his baby Isaac on the steps to the attic bedroom

My favorite part of the gathering was that every room was filled at almost every moment. The house pulsed with life. People wandered into each room and sat down on the floor to talk and laugh. The little kids ran and ran and ran upstairs, where an attic closet with two doors makes for a super duper race track. At one point, Marilyn’s younger daughter, Tessa, was kicking a ball with my grandson Oliver. Oliver wanted to run the ball in Marilyn’s old room, but Tessa didn’t want to play in her mother’s bedroom – it made her too sad.

We’d all brought card tables and chairs, and we set them up in the rec room for our pizza-and-salad feast. My sons checked out Grandpa’s bar – they remembered the old man as Santa, but he died too early for his grandsons to ever share a beer with him.

It was loud in the basement, like it used to be. Lots of laughter. But unlike the days of yore, a cloud of blue smoke did not fill the room.

I bet Jerry and Marilyn were smiling down on us from their celestial seats.

At the end of the party, we said goodbye and closed the door.

Email ThisBlogThis!Share to TwitterShare to FacebookShare to Pinterest
Labels: farewell to a family home, healing past hurts, relative with Alzheimer’s