Jayber Crow: a book to lift you up 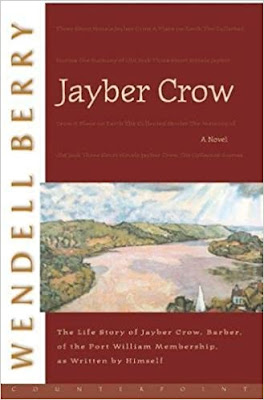 Need a book that will inspire you? Jayber Crow by Wendell Berry is made for COVID-19 days. In fact, it's a book for all days, for those who seek to remain human. I’ve never read a novel like this one. If you were to ask me what it’s about, I’d have to pause.

I could tell you it’s the story of Jayber Crow, a man who lives in a small Kentucky town – and it is. But that would be a shadow on a shadow of what it’s really about.

I could tell you it’s a love story – and it is. But that would give “love story” a more powerful new definition.

I could tell you it’s a slow-moving book about a slow-moving man during a slow period in the history of the United States – and it is. But that would be only a hint on a hint.

I could tell you I couldn’t put the book down in spite of its leisurely pace – and that would be true, but I couldn’t tell you why.

I could tell you the author weaves together thoughts about life and love, death and grief, marriage and family – and he does. But Jayber Crow doesn’t weigh heavy on your brain, like a tome on philosophy.

Wendell Berry is an American writer, now 85 years old, who
lives and farms in Kentucky. Readers of Mother Earth News know him as a champion of organic gardening and respect for the Earth.

And he is so much more than that. He is a man of faith, doubt, logic and humor. His writing is pure poetry that glides along like butter, a pleasure to read. How about if I share some of my favorite quotations? You’ll get an idea of why I love this book so much – and why I love Wendell Berry and want to meet him. I'll add my thoughts below the selections, on the right.

On grief: “Another new thing that happened to me after I came back to Port William was the feeling of loss. I began to live in my losses. . . . And like a shadow within a shadow, the time before my time came to me. I was old enough by then to know and believe that the old had once been young. . . . I knew I had come there out of kindness, theirs and mine. The grief that came to me then was nothing like the grief I had felt for myself alone, at the end of my stay in Lexington. This grief had something in it of generosity, some nearness to joy. In a strange way it added to me what I had lost.”

I agree that there is joy in grief;
we are blessed if
we have loved someone enough to grieve.

Presences of absences!
This is someone who understands
loving the dead.

On an uppity person: “She felt that the entire population of Hargrave had failed to recognize her innate superiority. . . . She was in favor of perfection and hated everything that was not perfect. . . .”

Heh.
I have met this person.

How familiar is the happy/sad feeling
when a suffering person
finally dies.

On a soul entering heaven: “I thought an unimaginable thought of something I could almost imagine, of a sound I could not imagine but could almost hear: the outcry when a soul shakes off death at last and comes into Heaven. I don’t speak of this because I ‘know’ it. What I know is that shout of limitless joy, love unbound at last, our only native tongue.”

Love unbound
as our only native tongue.
Fabulous thought!

On the Vietnam War: “We were, as we said again, making war in order to make peace. We were destroying little towns in order to save them. We were killing children in order that children might sleep peacefully in their beds without fear. We were raping and plundering a foreign land (and our own) for the sake of ‘love of country’ . . . . We had waded halfway across a bloody mire and could not get out except by wading halfway again, either forward or back.”

And so it goes,
to quote Kurt Vonnegut.

On modern humans seeking “relaxation”: “On those weekends, the river is disquieted from morning to night by people resting from their work. This resting involves traveling at great speed, first on the road and then on the river. The people are in an emergency to relax. They long for the peace and quiet of the great outdoors. Their eyes are hungry for the scenes of nature. They go very fast in their boats. They stir the river like a spoon in a cup of coffee. They play their radios loud enough to hear above the noise of their motors. They look neither left nor right. They don’t slow down for – or maybe even see – an old man in a rowboat. . . .”

Ha!
This reminds me of
Wisconsin lakes during the summer.

On earth and heaven: “This is a book about Heaven. I know it now. It floats among us like a cloud and is the realest thing we know and the least to be captured, the least to be possessed by anybody for himself. It is like a grain of mustard seed, which you cannot see among the crumbs of earth where it lies. It is like the reflection of trees on the water.”

On wanting Christ to come back to earth to end the war: “Why hasn’t He done it at any one of a thousand good times between then and now? I knew the answer. I knew it a long time before I could admit it, for all the suffering of the world is in it. He didn’t, He hasn’t, because from the moment He did, He would be the absolute tyrant of the world and we would be his slaves. Even those who hated Him and hated one another and hated their own souls would have to believe in Him then. From that moment the possibility that we might be bound to Him and He to us and us to one another by love forever would be ended.”

Bound by love
rather than by awe.
Yes!

On how we experience Christ: “. . . He must . . . be present only in the ordinary miracle of the existence of His creatures. Those who wish to see him must see Him in the poor, the hungry, the hurt, the wordless creatures, the groaning and travailing beautiful world.”

Thank you, Wendell Berry. Maybe I’ll meet you some day . . . or at least send you a letter of gratitude.

And THANK YOU to my daughter-in-law Katie Sue Sweet for lending me this book! 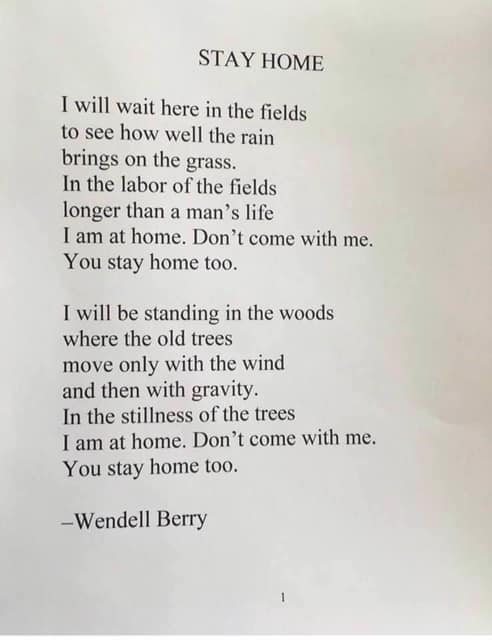